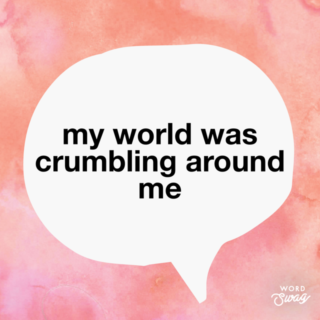 I am a 26 year old lady and a mum to one, and when I was 17 something happened to me that changed my life for a long time. I warn you it is a negative experience and may be triggering for some. It was because of these few months of my life that I got much needed help. I just wanted to write this so that if anyone that has been through it or is struggling with their mental health can see that with the right help there is some hope that it will all be okay.

Picture this, I was in the middle of a college day when I started to become very disorientated. It felt like not just the people, but the world was going around so fast that I was struggling to keep up.

I started to zone in and out of what was happening in the classroom. The best way I could describe it is brain fog. In the literal meaning when classmates and teachers were talking it was like their words were going through my ear to my brain but reaching a literal thick cloud and only certain words were going through. As a result of this I was only replying to parts of conversations and I could see from the reaction of those around me that what I was saying didn’t make sense.

After college I had planned to go to my friend’s house for the first time. On the train home, my friend picked up on my concerning behaviour, asking on more than one occasion, Aare you okay?” or “You don’t seem yourself.”

We got to her house and I remember feeling extremely overwhelmed. She had a few siblings and a lot of noise going on. Normally this wouldn’t have been an issue but on this day it was.

I noticed my body becoming smelly so I repeatedly went to the toilet to wash my hands. I was so zoned out that it was obvious to my friend and her family that something was up. I was stopping and starting at odd intervals just like at college. As well as laughing when there was nothing particularly funny happening.

My friend sat me down and said “Freya, I think something is wrong, are you okay? Do you want me to ring your mum?”

So she rang my mum and asked her to pick me up. As I got into the car I broke down in tears, I was petrified I didn’t know what was going wrong.

I tried to get settled at home but I was incredibly fidgety. My mum had her cure all remedy of a drink coupled with a hot bath. This, unfortunately, was a bad move, I went into the bathroom with a very clear idea in my head that I was unclean. I just had to be clean. I got some bleach and whatever I could find and started to scrub the bath. Without awareness I ran the bath without rinsing out the harsh chemicals and climbed in.

The bath was so hot it was a miracle that I didn’t faint. Holding onto the sink I managed to get out and get a towel. As I opened the door my mum asked, “Do you feel better?”

I was so confused my world was crumbling around me and I didn’t know how to get out intact.

Feeling fragile I got into the comfiest PJ’s I had, with the thought that if I felt physically comfortable, I would feel mentally soothed. Then all of a sudden to add fuel to the fire an itchiness appeared. Logically it was probably the harsh chemicals reacting on my skin. Not thinking logically I saw it as another addition to the sense of bewilderment and anxiety.

My mum had gone downstairs to try and explain the situation to my dad. In her absence the symptoms took a step up, my fear manifested itself in an unnerving way. I looked up and saw my TV with its little red light, my laptop on the floor and it was as if something clicked in my head and they were turned into a threat. I was determined I was being watched. I unplugged everything electrical and turned my bedroom light off. Then I climbed under my duvet desperate to create a safe space.

I have no idea how much later, but my dad knocked on the door. To which I feebly replied, “Come in.” He uncovered me and saw the cowering me that emerged and asked, “What’s going on Freya? Talk to me.”

I don’t remember exactly what I said but I remember the speed and emotion to which I said it, faster than the speed of light and with a harsh anxiety.

After some deliberation it was decided by my parents that A&E was the best option. The car ride was a complete blur. I didn’t really understand what was going on. I had both parents saying, “It’s going to be okay,” but I didn’t feel confident that it was true.

When we got there I noticed the lights were unbelievably bright. All the people talking and background noise was unbearable. I ended up sitting with my ears covered desperate to block it out. I still had my college bag with me, so I pulled out my notebook. With it I wrote random words, thoughts and feelings, some of which I scribbled out with scratches of pen all across the page.

There was a long wait and my mum had to go home eventually. My dad noticed how increasingly distressed I had become, so he did his strong minded, stern talking bit and they managed to find me a side room with doors either side, as the psych person was on his way.

My dad kept rattling on to me trying to help, however it just started to irritate me. On top of that I began hearing voices of my friends from college talking amongst themselves also talking to me.  It all came to an ultimate moment, not aware of the world around me, I shouted “THIS IS YOUR FAULT” Dad was bemused and answered “What? I don’t understand.”

From there months of  anger and sadness just flowed from my mouth. He sat and listened, eventually saying sorry. Sorry for leaving us and mum, sorry that he had caused mum to have a mental breakdown all as I was starting my dream course at college while holding down a part time job.

Just as the tension in the air eased a little a man popped his head around the door and said, “Hi! I’m from the mental health team and I’ve come to have a little chat with you both.” He asked lots of questions and I explained my experiences to the best of my ability. He said to me, “I don’t think you want to stay here tonight, do you?”

“No, no I don’t,” I answered. He gave my dad a prescription for diazepam and said, “this will help her get some rest, and I will refer her to the emergency mental health team to see her ASAP.”

On the drive home I was wired and absolutely exhausted at the same time. I tried so hard not to sleep as I was scared at what it would be like. If being awake was a crazy nightmare I thought being asleep would be even worse. I did drift off now and then despite my best efforts, I’d wake up feeling disoriented and horrid.

When I finally got in I got a big hug from my mum, ate minimal food, had my tablet and headed off to bed. It didn’t take long before I realised I couldn’t get comfortable. I had been smelling a foul stench all day, it was getting worse. Initially I decided it was my breath, so I got my toothbrush and started to brush until my gums felt raw. Nope it wasn’t that, I could still smell it, having never smelt a baby’s nappy before, when asked what it smelt like I said “baby poo”.

I stripped my bed and threw my sheets on the floor. My next move was to go into my mums room and get as many of her perfumes as possible to spray them on my pillow. It slightly masked it but the stench was still there. Luckily not long after, my sleeping tablet kicked in.

When I woke up I felt dazed and confused. I didn’t understand what time it was or what was going on around me. I don’t remember too many details apart from feeling like I was out of sync. Everyone seemed to be going at a different pace to me. My mind was also overwhelmed with paranoia, as I watched Home and Away I felt like the characters were talking to me, as if I was in the show in secret.

We managed to get an emergency CAMHS (Child and Adolescent Mental Health Services) appointment. I remember walking in and being so embarrassed. I felt shame for the previous few days’ behaviour as well as being terrified that it wasn’t over. She diagnosed me with temporary psychosis. My dad tried to control the conversation when my parents came back in and it was infuriating. She prescribed me some medium to low dose antipsychotic medication mixed with some antidepressants, while explaining it won’t be a quick fix. I came back every week and talked until it was weaned down to every other week. It really helped me to come back down to earth and feel more grounded.

I didn’t instantly feel good, that became clear when I attended my mum’s choir performance at the local shopping centre. I was completely dissociated, it was horrible. With help from the medication and a really understanding psychiatrist I got better bit by bit learning to feel comfortable within my skin and my environment again. I also completed a course of CBT for social anxiety which gave me some solid skills for future use. I did have a setback a few months after reducing my medication which was really tough. I even ended up asking my dad if he was my dad. I genuinely thought that it was some big conspiracy theory, that I had been lied to all my life. It was pretty drastic. But with tweaks to my medication it eased quite quickly. I also needed my family situation to become less stressful at the same time as getting on top of my college work.

Within 6 months I was antipsychotic free and although I have at times felt myself losing my head I haven’t needed them again since.

When I look back on this turbulent time in my life it brings back some traumatic memories but I got through it while learning a lot about mental health and empathy which are key issues in this world today. I realise now that there was still a lot of work to be done but after some solid counselling getting all of my demons out of the closet I am feeling strong and ready to face the future to follow my dreams.