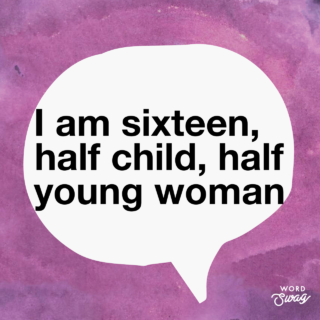 Trigger warning: This story includes references to family bereavement which some readers may find upsetting.

The sheepskin jacket hangs carelessly from the wing of an armchair where its owner has discarded it. Olive green on the outside, creamy wool inside, it’s not a new jacket. There are creases where it has moulded to the shape of the owner and, if you look closely, a stain or two.

It’s a crisp, clear night in early April. The day has been bitterly cold with leaden skies and even a few swirls of snow. There are buds on the old apple tree in the garden of the cottage at the end of the lane. But their promise of spring seems false.

I am sixteen, half child, half young woman. Earlier I was out babysitting when one of our neighbours knocked at the door. Her pale face prompted the first prickling of fear.

‘Your father has been taken ill and your mother wants you to come home.’

A substitute babysitter installed, we drove the short distance. The lane was pitch dark, the only light coming from a few lit porches and windows. And the glowing red taillights of an ambulance parked outside our cottage, its engine humming.

I felt panic rising. If dad had been taken ill, why was it still there? Why hadn’t it taken him to hospital?

The neighbour steered me away from our cottage, towards the house of another. The door opening, I pushed past to my mother in the sitting room.

I knew the answer, of course. The low, guttural howls seemed to come from someone else.

People come and go – the police, the vicar, other neighbours. Phone calls are made to aunts and uncles. My younger brother and I retreat to the study. There will be many more tears later but, for now, we are both dry eyed. Numb with our loss and the knowledge that our lives are irrevocably changed.

There are things we cannot yet know, of course. That, within a few short months, we will be so used to our family of three, I will be taken by surprise at a friend’s house when her father comes home from work. Or that, decades later, I will be fighting back tears on a train, having overheard a young woman happily chatting to her father on her mobile phone.

The elderly village doctor knocks on the study door. Would we like to see our father?

We walk down the well-worn cottage path together, the elderly doctor in his tweed jacket and the young girl-woman in her platform shoes. The earlier clouds have dissipated and stars stud the night sky.

As we go through the sitting room door the sheepskin jacket shocks like an unexpected blow, vividly evoking the living man who so recently wore it. It still holds the shape of his body; if I were to bury my face in it, I would smell him.

Instead, I climb the stairs to see my father one last time.

When I return a few minutes later I am prepared for the sheepskin jacket. I stride quickly past, keeping my eyes on the door.