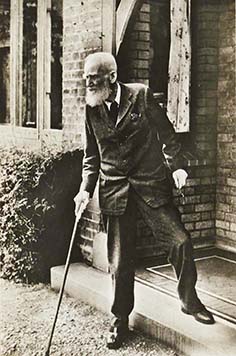 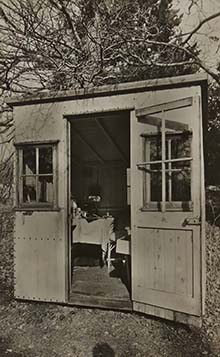 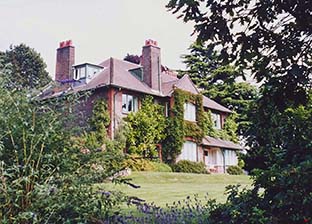 George Bernard Shaw (1856-1950), playwright, critic, and political campaigner, was the leading dramatist of his generation. He wrote more than 60 plays, including Pygmalion and St Joan, and was awarded the Nobel Prize for Literature in 1925. He lived at Ayot St Laurence, near Wheathampstead for 44 years.

Shaw was born in Dublin and moved to London in 1876 to developed his career as a writer. His first theatrical success was Arms and the Man (1894), but it was in the early years of the 20th Century that he established his reputation with plays such as Major Barbara, and Man and Superman, which he used to express political and social ideas.

In 1938, he won an Academy Award for best screenplay for Pygmalion, becoming the first person to win both a Nobel Prize and an ‘Oscar’ (the second was Bob Dylan).

In 1906, Shaw and his wife Charlotte moved into The Rectory at Ayot St Laurence, later renamed as ‘Shaw’s Corner’. He wrote many of his plays there in a specially constructed writing hut in the garden, which was built to revolve so that it would catch the sunlight. Shaw called the hut ‘London’ so visitors could be told he was ‘in London’ when he wanted to write undisturbed.

He was regarded as an eccentric character in Ayot, racing through the lanes in his car at high speed (20 mph), but over the years he became a familiar figure in the area. Following the blizzard of 1915, he joined the men of the village in clearing the debris, spending days sawing up fallen trees which had blocked the roads.

Shaw died at Ayot aged 94, and his ashes were scattered in his garden. The house now belongs to The National Trust and is open to the public.