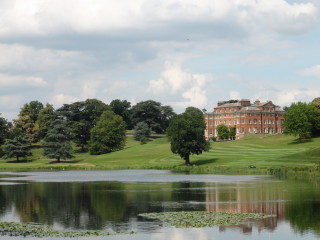 Lady Caroline Lamb was born in London on the 17th November 1785, the daughter of Frederick Ponsonby, who later inherited the title Earl Bessborough, and his wife Henrietta Elizabeth. Her mother was the sister of Georgiana, Duchess of Devonshire and an ancestor of Princess Diana. Georgiana, the subject of the recent film The Duchess (2008), was well known as a leader of fashion and for her political campaigning in support of her lover Charles Fox. Caroline spent a large part of her childhood with her aunt at Devonshire House and was educated with her cousins.

In 1802, at the age of nineteen, Lady Caroline met her future husband, the Hon. William Lamb, heir to the first Viscount Melbourne, at Brocket Hall, his family’s country house in Hertfordshire. They were married in 1805 and spent their honeymoon at Brocket Hall. They remained in love for the rest of her life, and managed to stay on good terms despite her many public infidelities and indiscretions. They had two children, a boy named George Augustus Frederick, born in 1807, and a girl born in 1809 who died soon after birth. Their son may have suffered  from a form of autism and  they cared for him at home rather than sending him away. This may have put a strain on their relationship, coupled with William’s increasing involvement in Whig politics. He became the Chief Secretary for Ireland in 1827, inherited his father’s title and moved to the House of Lords the following year. He was appointed Home Secretary in 1830 and Prime Minister in 1834, becoming Queen Victoria’s first Prime Minister, mentor and trusted confidant.

Caroline embarked on a notorious affair with Lord Byron (1788-1824) in the spring and summer of 1812. When Caroline first heard about him he was described as ugly and having a club foot, but she replied that ‘if he is as ugly as Aesop I must meet him!’  She is believed to be the person who first described him as ‘mad, bad, and dangerous to know’.

At first she avoided a chance to meet him, which increased his interest in her; and their affair began in the spring of 1812, but lasted only four months. When he ended their liaison she was heartbroken and suffered a serious mental breakdown. She was an accomplished writer and poet but in society her reputation as a notorious adulteress was the chief source of her fame. She was viewed as a woman out of the control of her husband and family and her public pursuit of Lord Byron caused a scandal, which reflected on her husband; yet he refused to abandon her and appears to have loved her despite these problems. They finally separated in 1825, but she asked to live at the family home in Hertfordshire for the last years of her life as she loved it so much. However, she was taken to London to seek treatment when she became seriously ill and she died there in 1828.

Caroline wrote poems, novels and diaries and she and Byron each made references to the other in their works. Her best-known work is the novel, Glenarvon, which was published anonymously in 1816, although she was widely known to be the author. The main character, Ruthven Glenarvon, was the first portrayal of a lonely, tortured Byronic hero outside the works of Byron himself, and was considered to be an unflattering depiction of the poet and the society figures of the time, earning Lady Caroline the disapproval of her former lover and members of her social circle. The novel was popular, but was dismissed as overly melodramatic. Retrospectively however, it can be seen as a proto-feminist work.

Caroline and the Literary Vampire

The first published vampire story in English fiction, The Vampyre (1819), by John Polidori, used the name Lord Ruthven in an overt reference to Lord Byron and Lady Caroline. Polidori had accompanied Byron to Europe in 1816 as his physician and they were staying at Byron’s Villa Diodati on Lake Geneva along with Percy Bysshe Shelley, Mary Wollstonecraft-Godwin (later Shelley) and her sister. During this time, they held a competition to create the best ghost story. It was known as ‘the year without a summer’ due to a volcanic eruption the year before, which subsequently caused the weather in 1816 to be dark and stormy – perfect for reading about and inventing tales of the supernatural.  Mary Shelley created the tale of Frankenstein and Byron recounted the beginning of a tale about a vampire, thus producing two archetypes of English horror. Polidori fell out acrimoniously with Byron and Shelley and returned home, but later decided to complete Byron’s story, publishing it in 1819. Unfortunately, the publisher decided to claim Byron as the author, and whilst this helped sales it caused a further rift between the men. Polidor not only used the name of Caroline’s hero but also satirised her as a female hunter who pursues Ruthven and dresses in men’s clothing to get his attention; a reference to an incident when Caroline went to Byron’s house dressed in a page’s uniform.

There have been two dramatisations of Lady Caroline’s life, Ken Russell’s film Lady Caroline Lamb (1972) with Sarah Miles in the title role, which was an extravagant and exaggerated account of the scandals she caused,  and the BBC’s  2003 production Byron with Johnny Lee Miller and Camilla Power.