You are here: Home>Herts history>Towns and Villages>Baldock>Bondor in Baldock: A brief history of an iconic building

Bondor in Baldock: A brief history of an iconic building

Article Taken from The Annual Guide to Baldock and Ashwell, 3rd edition 2014 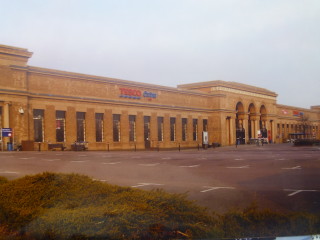 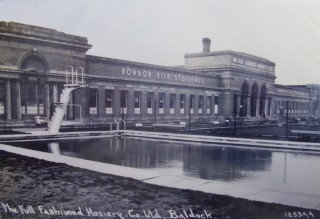 In 1924 inspired by Howard Carter’s explorations of Egypt, a giant art deco factory was designed by architects PHS Burditt and built in Baldock to house a film processing company called Kosmos. Today a giant Tesco store stands behind the facade, having been there since 1983, and at 150 metres wide, the listed front is the largest one in the town.

It was built of concrete made from crushed bricks, some of which came from a large house that previously stood on the site called The Elms (probably built about 1817). The house burnt down in 1916. The brick dust is what gives it it’s pinkish tone.

In fact Kosmos became insolvent before ever moving in to the factory and four years later in 1928 it was taken over by the Full Fashion Hosiery Company who were based in Yorkshire. Their trademark was a winged tailor figure and the original facade incorporated this. It was removed during the second world war however when the factory was requisitioned to make parachutes by the Ministry of aircraft Production, along with the equally impressive Spirella building in Letchworth.

The company slogan was “Fashioned or seam free, don’t take a risk, then you’ll certainly see sales will be brisk !”

Charles Woodward joined the company in 1937 and became it’s director, touring America to study the latest production methods. Following his visit, the now nationally known seven sizes of underwear were launched. The manager of the Baldock factory cutting room at that time was Mr Burchell.

The company changed their name to Bondor Ltd in 1946 and then Kayserbonder in the early 1950’s after expansion into Australia when they acquired the Kayser factory in Melbourne. By then they had a worldwide trademark (with the exception of the US) and wee known around the world for quality silk stockings,undergarments including cami knickers, slips and nightwear.

With newly automated production lines, machinists would now work on part of a single garment rather than the whole although there were complaint that this reduced job satisfaction. Nevertheless the company flourished and gained a lot of media exposure. In 1948 BBC presenter Brian Johnston interviewed Jean Lutkin in the Baldock works canteen for his radio programme “Works Wonders” and the company was featured on Pathe news in 1954. Staff would frequently be asked to model the underwear in London.

Equipped with sewing machines that could work 3,000 stitches a minute, staff were mainly women and paid on piecework over  a ten hour day that incorporated a morning and afternoon break along with lunch. Workers would make whole garments , often being given a dozen to finish, and good employees could earn up to three pounds a week.

Baldock was the head office and other offices soon opened locally at Biggleswade and later St Neots and Royston. Baldock staff trained the Biggleswade staff before that factory opened and a bus service ran between the two sites.

This was an era when staff were looked after by large manufacturing companies. An open air swimming pool, tennis courts and gardens were on what is now the Tesco car park for staff to use.Inside there was a ballroom with many sports clubs and social activities organised including dinners at the George and Dragon and parties at the manor house Baldock.

In those days large companies often acted as latter day Robin Hoods and Kayser Bondor was no different, giving generous help to those who worked for the company and its associates in times of need.This would include gifts of coal or financial help for those suffereing from long term illness, and widows with young children who were struggling to make ends meet. Staff morale was described as excellent and long service was rewarded.

The Baldock factory employed many people both from the town and the surrounding area, and today there are many people and local families who will have fond memories of KayserBondor and the impressive building that was its home.