You are here: Home>Herts history>People>Sportspeople>The story of Tom of "The Turf"

The story of Tom of "The Turf" 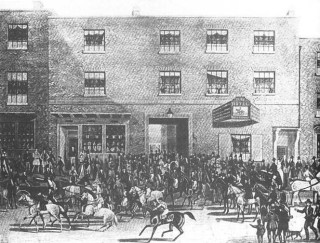 Tom Coleman doesn’t have a major place in the history of St Albans. He didn’t make his fortune or rise to a position of power. In fact he left the area a very disillusioned man in 1845.

But in the previous two decades the luckless entreprenur brought colour and excitement to the town and he undoubtedly boosted the growth of a sport that would turn into a multi-million pound industry.

Tom Coleman was the proprietor of The Turf Hotel in Chequer Street, later replaced by The Queen’s Hotel. Now it is the St Albans branch of the Cheltenham & Gloucester Building Society.

On March 8th 1832 a number of horses and riders assembled there for what is now known as the first of a series of steeplechases organised by Coleman; although in 1829 Coleman organised a race meeting at Nomansland Common near Wheathampstead. One of the races at that meeting was won by a horse owned by King George VI. In 1830 Coleman was in charge at a race meeting near Luton when Lord Ranelagh beat a horse ridden by a certain Captain Beecher.

Before 1832 steeplechasing was largely a matter of a private arrangement between pairs of gentlemen who raced each other across country to test the merits of their horses.

On this March day there was a parade through the streets of St Albans so that the crowds of spectators could see the horses. The four-mile course began at Colney Heath. The fences were difficult and the ground was very rough. There was a steep bank just before the winning post. The favourite, Moonraker, covered the course in just under sixteen minutes, beating Grimaldi by half a neck.

Hot baths and billiards at the Turf Hotel

After the race everyone returned to the Turf Hotel for hot baths, good food and ‘relaxing in the billiard room’. Hot baths and a billiard room were the innovations of that time and it made Coleman’s hotel a very popular place for the gentry and the nobility as well as members of the sporting fraternity.

Famous sporting personalities used The Turf Hotel on a regular basis. The Turf Hotel was also the headquarters of the local Conservative party. St Albans lost its election franchise for many years after it was discovered that their had been vote rigging at election time.

The next steeplechase took place in 1834. Jem Mason, a very famous jockey of that time, won on a horse called The Poet. The horse was owned by Lord Frederic Beauclerk who was rector of St Michaels in St Albans.

Grimaldi, who had lost to Moonraker in the first organised steeplechase, ran again in 1836 but unfortunately dropped dead as he passed the winning post.

Sixteen runners took part in the 1837 race which was noteworthy chiefly for a gold cup valued at one hundred guineas and presented by Prince Esterhazy, then on a visit to England. “The only thing ever given to me”, remarked Coleman ruefully. He often lost money on his racing promotions or was out of pocket when entertaining his noble friends.

Coleman had so far arranged a series of successful steeplechases for St Albans and the aristocracy but he was getting deeper and deeper into debt. As other entertainments such as the theatre became increasingly popular the public began to lose interest in steeplechasing. The last race run in 1839 proved to be a fiasco.

Captain Beecher, who finished second in the 1830 race near Luton, rode in the 1839 Grand National at Liverpool. He fell at a fence which today bears his name, Beecher’s Brook. Jem Mason, who had won the 1834 St Albans steeplchase, won on a horse called Lottery.

Badly organised and the course poorly marked out, the 1839 St Albans steeplechase evoked little interest except for the winning connections. They were the only people present for the usual dinner at the Turf Hotel afterwards.

By 1845 Tom Coleman left St Albans and he never returned. The Turf Hotel soon became a warehouse for the straw plait industry for which Hertfordshire was famous.