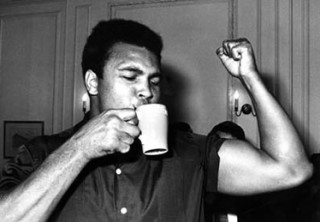 Drunk ovaltine since he was a little boy... 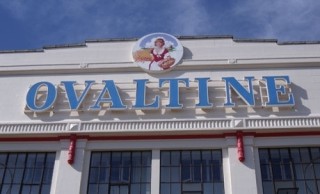 On the night of 8th March 1971 Muhammad Ali challenged Joe Frazier for the heavyweight championship of the world at Madison Square Garden, New York.  Ali had been stripped of the title in 1967 after refusing to fight in Vietnam.  In 1970 his boxing license was reinstated and after two warm-up fights he fought Frazier in what was justifiably billed as ‘The Fight of the Century.’  Both boxers were former Olympic gold medallists and undefeated as professionals.  Frazier knocked Ali down on the way to a fifteen rounds points victory.  Ali returned to the ring on 26th July 1971 with a tenth round TKO of Jimmy Ellis and was desperate for a return bout with Frazier to try and reclaim his old title.

So why was it that, on Thursday 14th October 1971, arguably the most famous man on the planet was at Sainsbury’s supermarket in Marlowes, Hemel Hempstead, signing cans of Ovaltine for delighted shoppers?

Muhammad Ali may not have seemed like a natural choice for promoting the famous malty drink, but he explained ‘I will not promote alcohol or cigarettes but I have honestly drunk Ovaltine since I was a little boy.’  Ovaltine had employed Ali to make personal appearances all over England, following a visit to Nigeria where Ovaltine had a large export market.

Ali told the Sainsbury’s shoppers ‘I won’t rest until Frazier gives me back my title.  Even if he drinks Ovaltine from now until I meet him, I’ll eat him.  Man, compared to me he’s so ugly.’  Ali’s famous poetry was not his best when he added ‘After I’ve whupped Frazier into a mouse, I’ll take Ovaltine round to his house.’  Several hundred autographed tins later, Ali departed through a fire exit for the next stop on his whistle-stop tour of Hertfordshire; Kings Langley.

Muhammad Ali’s promotional tour took in several larger towns and cities such as Manchester, Birmingham and Norwich, but Kings Langley was where Ovaltine was manufactured.  The factory, with its distinctive art deco façade, opened in 1929, although Ovaltine had used the site since 1913 when it employed just thirteen staff.  This rose to 1,400 in the 1950s as the company expanded.  It bought two nearby farms in the 1930s where the eggs, milk and barley ingredients of Ovaltine were produced to a very high standard.

The former champ posed for photographs with staff outside the Kings Langley factory.  Inside, Ali stood on a stage and took questions from the workforce.  What did he think of British heavyweight boxer Joe Bugner one asked, Ali quipped ‘Who’s he?  Does he box Ovaltine?’  Ali would later fight Bugnor on two occasions, winning both times.  When asked about being floored by Henry Cooper in their 1963 London fight Ali claimed that he had really just tripped over his bootlaces.  Another asked what he thought about swinging London, but he refused to answer the question as he was a respectable man.

His next stop was a press conference at the Caledonian Hotel in St Albans Road, then to Caters supermarket by the pond in Watford High Street, where he was greeted by happy crowds.  Reverting to verse, Ali complained that the tour was preventing him from training for a rematch with Frazier:   If I loose this fight I’ll be the worst fighter you’ve ever seen And I’ll blame it all on Ovaltine

Ali stayed at Caters for half an hour, signing hundreds more tins of Ovaltine.  The usually effervescent pugilist was more subdued after his long day.  At the end of his visit Ali returned to form and addressed the crowd, ‘Tomorrow I am returning to the States for a warm-up bout with Buster Mathis.  And that will be before I take MY crown off the ugly Joe Frazier.  He is just too ugly.’  In fact Ali went to Norwich the next day for more promotional work.

Ali was saying that he planned to retire the next year once he had beaten Frazier.  ‘I’m getting old’ he told the Watford Observer.  ‘I’m going to retire still beautiful, still unmarked.’  The second Frazier fight didn’t materialise until 1974, by which time Frazier had lost the title to George Foreman.  Ali won a twelve round points decision in a non-title fight before beating Foreman in Zaire and regaining the title.  He defended it against Frazier in Manila in 1975 winning by fourteenth round TKO.

The Kings Langley Ovaltine factory eventually closed in 2002 when Ovaltine production was moved to Switzerland, where it had been invented in the early 20th century.  The building was bought by a property developer and converted into luxury flats.

Just two weeks after Muhammad Ali had graced the county with his presence, west Hertfordshire had another superstar visitor.  Charlie Chaplin strolled into the Land of Plenty pub in Heronsgate with his wife and daughter.  Landlord Ted Cornhill was an old friend of the great silent-film comic having previously kept a pub in Denham where Chaplin used to drink.