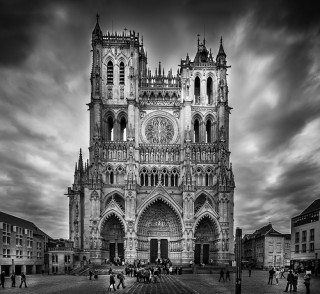 Dawn finds us on the outskirts of AMIENS and  we are ordered into action just off the main axis (of advance).  As we dash out to our gun platforms, the tanks and mobile Bofors engage some enemy M.T., {Motor Transport} & S.P. guns in the valley to the left of us.  Ammunition explodes as the vehicles blow up.  We hear over the air that our leading tanks have entered Amiens.  We have two more moves before 1200 hrs, finishing up at the village of DURY, about 2 miles from Amiens.  Here our leading tanks used flame-throwers to sort out the enemy and the C.P. staff turn fire-fighters to quell the blazing farm they have chosen as our H.Q.  We manage a hot meal, the sun comes out, and while we are waiting to move some of us journey to the top of the ridge to have a look at Amiens.

Away to the right, on the horizon is the famous Vimy Ridge, and through glasses can just distinguish the striking white monument to the fallen in the other Great War.  In the afternoon we pack up and have a triumphal entry into the city.  The people are almost hysterical with joy, and give us a marvellous reception.  Everywhere are Union Jacks, Tricolours and Old Glories, and everyone tries to shake hands with Tommy.  All too swiftly we are out of the city and into action the leading tanks to the north of it.  As we come into action the leading tanks are only 1000 yds ahead, and being engaged by some enemy guns.  They consolidate for the night and we spend that night as the most forward Artillery of the spearhead supporting the 3rd R.T. Rgt. & the 23rd Hussars.  We turn in for a well earned rest, with the knowledge that we have made history, for it will surely be remembered, that audatious {sic} advance from the Seine to Amiens right through the enemy defences to capture the German Commander in his pyjamas.

Another day of general advance all along the line.  We leave our bridge head position just north of Amiens and advance swiftly across country, keeping to the main axis of advance as much as possible.  We are heading in the general direction of Arras, and with the memory of of our welcome at Amiens still vivid, we look forward with anticipation to the liberation of that town too.  As we pass through a village, dark-skinned men in foreign uniform wave cheerily to us, they are French Singalese troops kept prisoners by the Germans, and just liberated.  We pass through woods containing curious heavily camouflaged buildings which we suspect to be connected with V.1. flying bombs.  The thoughts that we are at last putting an end to the ordeals of Southern England, and cutting off the V.1. sites keep us eager to push on swiftly.  We are by-passing any resistance.  Occasionaly {sic} French people tell us that 200 or so enemy are hiding in some wood or other on our route, but we cannot stop to worry about them, we know the infantry following behind will deal with them.  Our job is to push on, and push we do.

By nightfall we have travelled 45 miles and have encamped at the village of SAVY, a few miles west and north of Arras, which is not after all, on our centre line.  The Colonel congratulates the Regt. on the excellent advance.  Although we travelled cross-country, all the way, the main body went by road   Yet we never lost ground and all the guns were in action by nightfall in the right place.  Great celebration in the village that night, we are the first British troops the villagers have seen.  Our fighter bombers give us a scare when they dive on the village, but yellow smoke and strips convince them we are friendly.

Another great day of liberation.  Again the Regt moved off at 0700 hrs and continued the northern advance.  Our route lies through the great industrial district round LENS.  This is the first time we have entered an industrial area, and we are given a truly magnificent reception by the great crowds lining the whole streets.  The crowds are so great that progress can be made only at a crawling pace.  In consequence the more daring children crowd on to our vehicles, and we look more like a carnival that a fighting column.  A great day for the D.R’s, {Dispatch Riders} whose pillions are in great demand by the fair mdlles..   Cries “Bon Sonte”, “Good Luck”, “Good-bye”, “Vive le Tommy” and “Welcome” fill the air, and we are pummelled & slapped, pushed & jostled and our hands almost wrung off by the delicious people.  Just as we enter Lens we hear of a woman who last night sheltered a small patrol of British troops, they were discovered but made their escape.  The Germans shot her as they left, 4 hours before we arrived this morning.  We are the more eager to push on.  Cpt. Benson is shown a magnificent O.P., on top of a factory, by the Maquis and sees many Germans less than 500 yds away, but the guns are all on the road and he is not allowed to fire the mediums.  We are brought into action on the western outskirts of LENS, in open ground in front of a huge factory.  There is rumour over the Maquis radio that the Germans have asked for an Armistice.  We are sceptical, especially when at 2300 hrs, ‘Tank alert’ is ordered and we swing the guns 160 degrees to face the left rear.  However the report of the tanks came from the same source and we turn in at midnight without firing a shot.