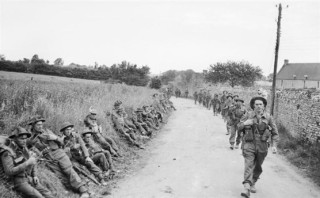 Land and move straight off the beaches to establish a position on the site of the “Mont FLEURY” enemy gun-position, and find huge casements knocked out by our Lancaster bombers.  The Survey D.R. is wounded by a sniper.  Three D.D. (?) tanks from “B” Troop to make a 7 gun Troop and “A” Troop move up establish a Battery position north of “ VER-SUR-MER ” through small-arms and mortar fire.

15 30 HRS.  Advance held up between Ver-Sur-Mer and CREPON. {D112}  We establish a position for the night during which ‘B’ Troop are shelled by tanks, and snipers are in the wood behind them.

‘D’ night.  We watch the flack going up from the beaches and we hear that Major Loveday (Battery Commander) has been wounded.

05 30 hrs.  Advance Parties held before CREPON; 0700 hrs, 200 Germans are driven out of the wood behind ‘B’ Troop by flame-throwing Shermans.  10 00 hrs, the Battery moved through VER-SUR-MERE, CRENNLLY and ST. GABRIEL.   Position in an open field with H.Q in the hedge.  It was here that we saw our first knocked out German S.P. (Self-Propelled-Gun.)

0100 hrs to 04 00 hrs, stand-to, parachutists reported falling in the RGTL: area.  Patrols were sent out but all that could be found were trees on the sky-line.  Several shoots at tanks forming up.  We move to a (new) Regtl. Area.

Between 18 00 hrs and 20.00 hrs we engage many  CORPS & DIVISIONAL targets on tanks, transports and mortars etc; on the St. Ledger feature.  We are joined by our L.A.A. (light anti-aircraft) guns

We moved to an orchard just north of the village of MARTRAGNY.  Position has been occupied by our machine-gunners the night before and was probably an enemy gun-position before that.  Soon after we arrived, “H” tank, (Battery Command Post tank) and “T.L.B” carrier (Troop Leader “B” Troop) had to go to the D.P. to take supplies.  They were never seen again.  Much anxiety over the personnel, Lr. McCaie, L/Bdr Tagg, Guns Brooks & Dudon is ???????  At dusk saw our first 7W190r diving on lading infantry.  Heavy AA against them.  During day fire over 1,000 rds HE mainly against tanks in area of Jerusalem cross-roads.

No news of “H” or “TLB” .  Remain in orchard firing in support of 7th Armoured Div. moving up from Bayeaux.  afternoon occupy position in orchard just off main road Bayeaux – Tilly.  Pass through  St Ledger and see our first German fighters.  O/P’s are heavily mortared, L/Bdr. Butcher and Gnr Whitelock wounded, removed to base.

Exciting day for OP’s established  just South of Jerusalem x roads.  In the Morning the 7th Arm. Div. attacked Tilly-sur-Seulles. attack lasts all the afternoon, but by evening they are forced to withdraw, having been held up by pillboxes, half tracks and S.P’s.  Enemy tanks in woods south of Tilly.

In the evening the enemy counter attacked.  Our O.P’s come under heavy shell fire, they are surrounded by enemy infantry and have to dash through enemy lines with arrivals lowered.

We dig in as we learn the enemy are putting up a stiff fight for Tilly.  First letters arrive from England dated May 31st/June 1st.  Wagon lines established in Chateau on south edge of Bayeaux.  Our first line re-inforcements {re-enforcements} arrive.  Major Corke takes command of Battery.

Severe fighting in and around Tilly.  day of hard firing from gun-end.  We hear that Capt Turnball of 342 has been killed while acting as F.O.O. {Forward Observation Officer}  First newspapers arrive and we continue digging in.