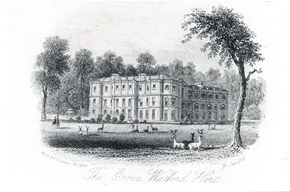 Rose at ½ past five. After Breakfast took my fawn to graze in the front of the house, because a little grass does her a great deal of good. In the afternoon Miss Smart and I walked to the Grove to return a bag Mrs Villiers had left.* During the evening Fairy came with us and everybody gazed on her with the greatest admiration.

* The Grove was the house and estate of George William Frederick Villiers, the fourth Earl of Clarendon, whose land to the north of Cassiobury bordered that of Adela’s father.

Rose at ½ past 6. After Breakfast I did not go out because I was busy with taking my Canaries up in the Study. This morning my hen Canary died suddenly from weakness and fright. 2 young Goldfinches are also dead. In the afternoon rode to Barker’s.

Rose at ½ past 6. After Breakfast, took the dear Fairy for a walk about the lower Park among the plantations and long grass, which she enjoyed. This morning we all went to see the Queen pass on her way to Windsor from Wobourn Abbey. I think Prince Albert is very handsome, but I cannot say so much for the Queen. She looked very pale and fatigued.

Rose at ½ past 7. After Breakfast went to Church. In the afternoon I took Dear Fairy for a walk. She paid a visit to the Bucks but soon came back to me. She never deserts me. I then went with her to see my rabbits and found one dead.