You are here: Home>Herts history>Topics>Life under Lockdown>Ellenbrook Fields; expanding our horizons close to home during a pandemic

Ellenbrook Fields; expanding our horizons close to home during a pandemic 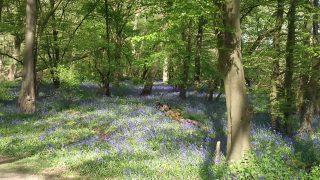 The lockdown restrictions during this pandemic have meant we have had to look for more walking opportunities close to home, in Hatfield. One day we decided to go over to Ellenbrook Fields, aka the Old Airfield, where we have walked before but not for a while.

On a beautiful spring day we found the area much less bleak than we remembered and with more paths with reasonable surfaces, given the dry weather, as well as the former taxi-way, a wide concrete track. This stretches dead straight for 800 metres before turning towards the former runway, great for small cyclists. The runway is no longer obvious because the surface was excavated and used in the foundations of the Business Park, new housing and the UH site which were developed when British Aerospace left Hatfield, but there is an information board showing where it was. There are some other boards around the site, which is extensive….and flat.

We have been back several times and done different routes round and enjoyed the wide open space, where the vegetation has grown up quite a lot since we last went, including some reed beds near the Ellen Brook. We have been hearing larks, watching red kites and admiring the longhorn cattle . . . from a distance (they are fenced in!) Best of all, at the far side, we found a bluebell wood we never knew was there, and we have lived in Hatfield for 55 years.

Mostly we see other walkers, with and without dogs and children, joggers, and cyclists large and small, but never in large numbers and some quite chatty. The further across the site you go the fewer people there are. We have also found some other local footpaths on the edges of the town that we didn’t know, including those leading up to a trig point at 110 metres (high for this area) between Hatfield and Welham Green, but the airfield and the wood have been the most rewarding.