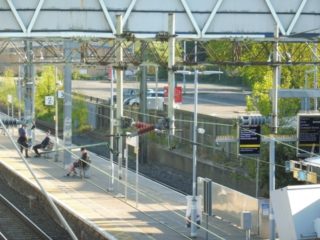 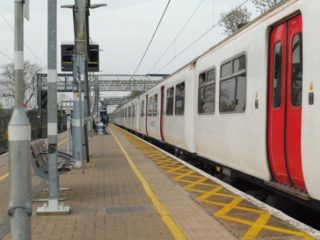 Passengers leaving the 1841 train 16th April 2020. I did ask permission before taking the photograph on railway property.
Colin Wilson 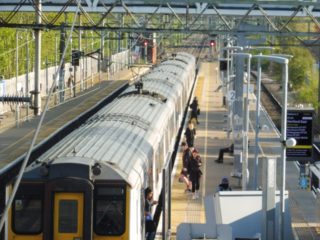 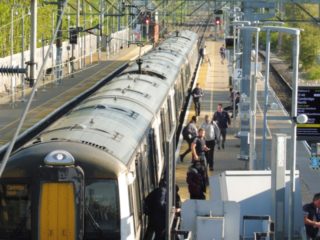 Passengers leaving the 1751 train on Monday 20th April 2020. This would usually be one of the busiest commuter trains
Colin Wilson 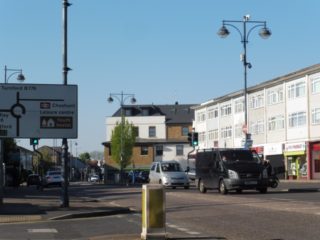 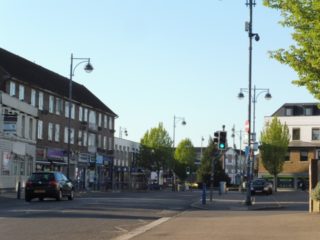 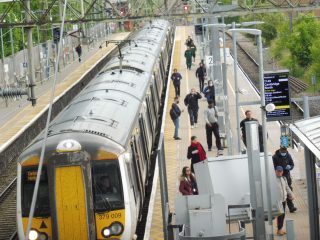 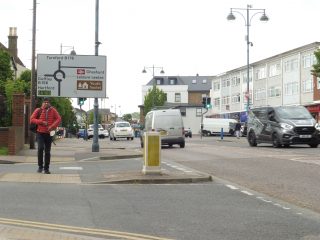 Between about 1700 and 1830 on weekdays Cheshunt is busy. Cars, buses and vans near the Old Pond are slow, bumper to bumper. If returning home by train you should get a seat at Liverpool Street. By Tottenham Hale there’s not much chance, and sometimes it’s touch and go if you’ll even get standing room. At the risk of stating the obvious, keeping any sort of social distance would be impossible.

Government rules during the Covid-19 lockdown period were to avoid any unnecessary travel, and that public transport should only be used by key workers. A number of buses had the destination blinds altered to remind customers of this.

The photos attached to this article were taken on the weekend after Easter, on 16th and 20th April 2020. There’s always the chance that traffic is unusually heavy or light on a particular day, hence the spread of days.

Cheshunt is a busy station. There will only be a few spaces left in the car park. Now there were only a couple of vehicles parked up. The lack of vehicles indicates that few passengers had left Cheshunt during the day.

On Thursday 16th April the 1841 departure (Stratford to Hertford train) showed just a couple of passengers leaving the train. The 4 people on the platform were waiting for the 1851 train to Cambridge; none got on the Hertford train. The following Monday, April 20th, showed the same situation. 4 passengers got off the 1741 to Hertford, which had come from Stratford. The next arrival would normally be a very busy train, leaving Liverpool Street at 1727, just right for office staff leaving work at 5 o’clock. It was also the fast train to Cambridge, stopping only at Tottenham Hale before calling at Cheshunt. A total of 10 passengers stepped onto the platform.

While walking near the line at similar times it was noted that only a handful of passengers used any of the trains, even though the service frequency had been reduced.

As a rule traffic at the Old Pond is heavy. While not a traffic jam, movement is slow and there are no parking spaces to be had in the layby areas. Quite often cars are idling, waiting for a possible chance to park and blocking the layby. On both days this was definitely not the case. Photos taken at about 1700 and 1800 showed but little change.

May 13th was significant as the day that some workers were encouraged to return to work. Those who could work from home should continue to do so. Travel to work should be by walking or cycling if possible. leaving public transport for essential workers.

14 passengers alighted from the 1748 arrival at Cheshunt. The car park was empty.

At the Old Pond at about the same time there was a little more traffic than before , but sporadic. It was still easy to cross the road without having to bother with using the lights controlling the pedestrian crossings.

Put simply, not much busier than in April.

The next significant day was to be 15th June, when most shops and businesses could open provided certain conditions could be met.