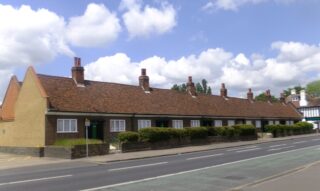 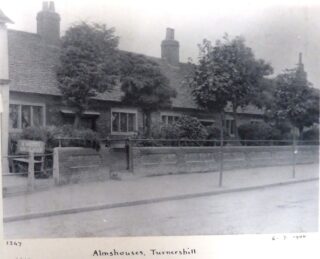 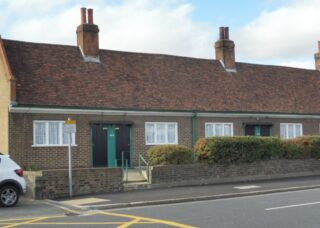 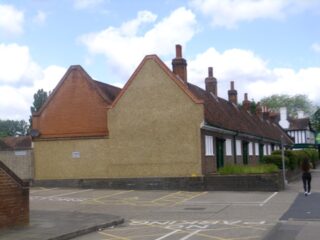 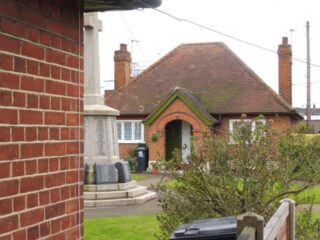 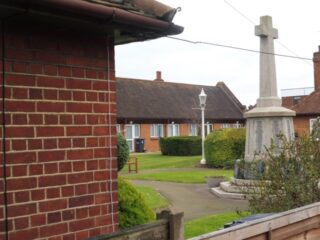 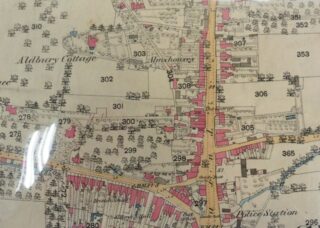 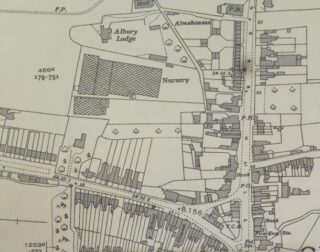 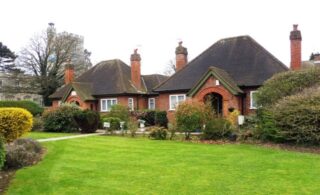 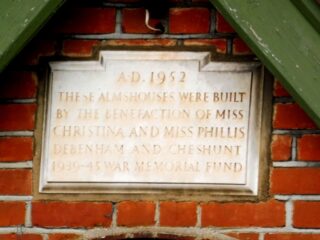 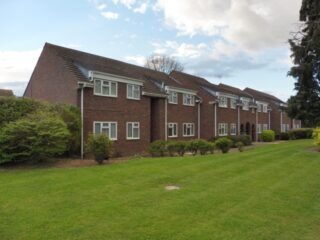 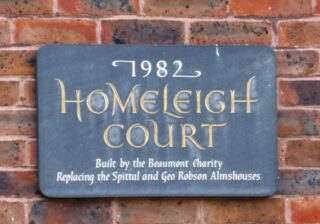 A number of benefactions were amalgamated under the title of The Beaumont Charity in October 1859, under a scheme approved by the Charity Commissioners. Among them were the King James Compensation and the Spital almshouses. George Robson’s almshouse followed in 1913. The articles about these should be read in conjunction with this article. Other almshouse properties were given later. In 1873 the trustees owned 62 acres, providing an income of £216. How the charity got its name is unknown but two suggestions have been benefaction by the Beaumont family, or from lands owned at Beaumont Green.

The Beaumont Charity provides low-cost homes for needy residents of Cheshunt parish. Applicants must be in need, over 60 and have resided in Cheshunt for at least 2 years. Since 2013 these requirements have been eased so that people who have left Cheshunt can return, or elderly parents of Cheshunt residents can be closer. The provision was for widows, but two women titled Miss died in 1939 and the 2021 accounts refer to couples.

Nowadays the Charity’s sole purpose is the running of the almshouses. It owns freehold properties on two sites. All 40 properties are one bedroom unfurnished. There is a paid warden at each site in accommodation provided by the Charity.  The accounts reveal a continuous process of repair and modernisation.

The Turners Hill site has twenty four terrace or semi detached bungalows:
1 – 10 The Ancient Almshouses. Also known as the King James Compensation almshouses.
11 – 14 Dewey almshouses. Given by Clara Elizabeth Dewey, by her will of 1923.
15 – 20 The War Memorial Homes of Rest
21 – 22 Norton Almshouses
23 – 26 The Anstee Almshouses
The 2017-21 accounts refer to building four new Anstee almshouses.

Homeleigh Court has four unfurnished one bedroom bungalows and 12 unfurnished one bedroom flats, consisting of:
1 – 2 King George V Jubilee Almshouses, dated 1935.
3 – 4 The War Memorial Almshouses. Built in 1953 as part of a war memorial effort and donated by Christina and Phillis Debenham of Cheshunt Park.
5 – 16 Almsflats. Built in 1982 to replace the Robson and Spital almshouses. Part of the funding was compensation paid when the Spital almshouses were demolished to make way for the M25 motorway; the rest was a loan from The Housing Association (since discharged).

The Beaumont Charity is a member of the Almshouse Association and registered with the Charity Commission ref 205825. Despite a 17th century foundation,  buildings are not listed by Historic England.

There are very few anecdotes about people connected with the almshouses. Sarah Porter, giving evidence in a lease dispute case, said she had lived in the almshouse for 8 years (her son said for longer) in 1862/3. This tells us little about the almshouse, but it is interesting that her son was able to rent property locally while his mother was poor enough to require almshouse accommodation. Charlotte Howlett lived nearby and died in 1881. She made a living by doing needlework and waiting on the old people at the almshouses. Who paid for her services is not recorded. Like most places, Cheshunt celebrated Queen Victoria’s golden jubilee in 1887. Mrs Bailes provided a carriage for the ladies of the Turners Hill and Spital almshouses so they could join the festivities at Aldbury Field, and they had tea there afterwards. Miss Alice Mary Judd, age 70, collapsed outside Manor House, Cheshunt in 1939. She died soon after being admitted to hospital. Also in 1939, Miss Eliza Emma Venables died aged aged 64. She had lived in Cheshunt for fifteen years and at the Almshouses for about four years. Her parents were well-known residents in the district.

The Cheshunt War Memorial, unveiled in February 1923, is located in the centre of the almshouse grounds. It would not surprise me if it was the only one so sited. The grounds are certainly packed every Remembrance Sunday. It would be interesting to know why it was placed on more private land as opposed to the majority which are far more accessible to the public. The bonus is that it is less accessible for any vandalism.

https://thebeaumontcharity.co.uk, including links to Homeleigh Court. There are also photos of the various properties

https://www.warmemorialsonline.org.uk/memorial/253581/ has details of the war memorial, and shows some of the almshouses in the background

Newspapers can be accessed on the British Newspaper archive website