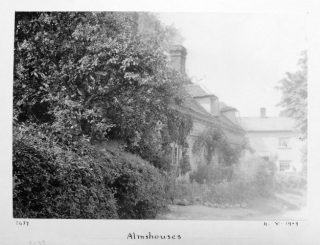 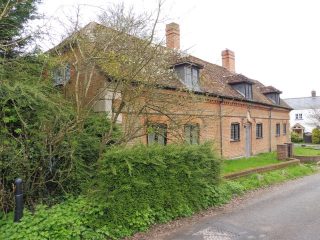 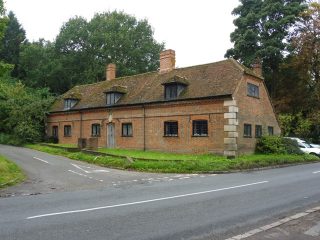 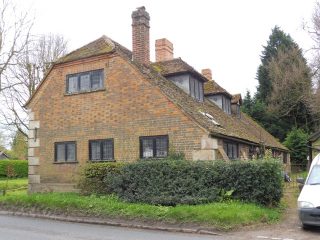 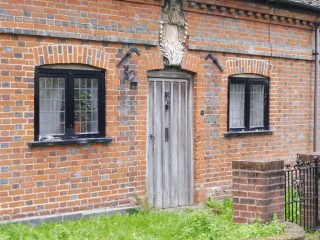 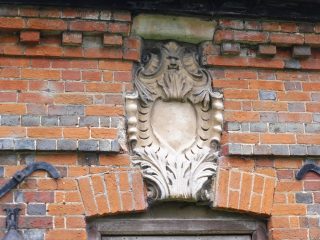 The cartouche above the front door. Sep 2017
Colin Wilson

Robert Page died in 1492. The details of his bequests do not mention any almshouse provision. A copy of his will is held at HALS but it was not possible to inspect it at the time of writing.

The original building, which belonged to Robert Page’s Charity, was built next to the churchyard. VCH says that the charity purchased other properties in 1553 and that the building belonged to the charity. Hence it may or may not have been built later.

That building was pulled down by Dr. Chauncy, the rector from 1723 till 1762, who left £200 for the erection of a new building a short distance from the original site. According to Historic England the date 1767 is cut into the brick by the central cartouche but this was not apparent when visited in 2017. In 1819 it was used by the parish as a poor-house, retaining the name of the Town House. Originally 3 almshouses, it is now one house. When visited in 2017 it was confirmed as being a private property.

Cussans makes no reference to the building. It was grade II listed by Historic England in 1967, ref 1101288.

Rewaders are also referred the the article about Cottered Page.

The Victoria County History of the County of Hertford (4 vols). Ed William Page
Vol 3 pp 227 / 32. Includes a drawing by Paul Rock dated 1911. This is almost the same as Whitford Anderson’s photograph.
Issued Archibald Constable & Co. 1912. Reprint by Dawsons of Pall Mall 1971 (ISBN 0 7129 0477 8)
This publication been digitised by British History Online (BHO) and is available online at www.british-history.ac.uk/vch/herts/vol3/pp226-232