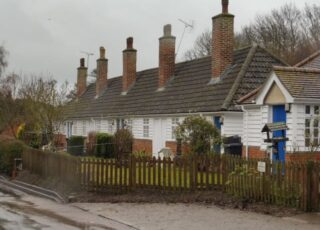 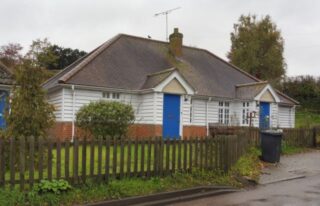 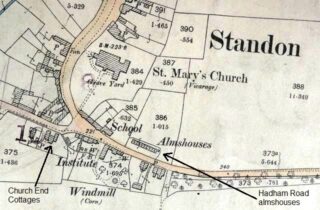 Leaving Standon on the Hadham Road you pass an attractive pair of buildings, with white weatherboarding on brick bases. They are the almshouses.

Erected in the 18th century, they may have originally been the weaving sheds linked to the workhouse, which housed up to 70 souls. The 1834 Poor Laws centralised workhouse provision, the inhabitants going to Ware. At some time after this the buildings were repurposed for use as almshouses. As happened in other places, the privies were regarded as defective by 1881.

1897 was Victoria’s diamond jubilee. Proposals were put forward in celebration. They included plans to replace or improve the almshouses. In the end they were entirely renovated inside and out, only the thatched roof being left. It was reported that they presented a particularly pleasing aspect to the village entrance, and the aged folk were comfortably housed. The houses were well lighted, ventilated and cheerful. The work was carried out by Mr C Whitaker, and most of the cost was borne by a gentleman in the village. Further repairs were needed in 1902, financed from the Coronation Fund.

Thatched roofs have a finite lifespan, so replacement was needed by 1906. Local farmers provided the straw, local gentlemen provided the finance, and an expert thatcher was employed. This was for the present group lower down the hill. The original ten residences, were later reduced to five by combining residences. They have tiled roofs and chimneys which look too tall. The explanation is that the thick thatch required taller chimneys.

At a later date a further block of almshouses was built just up the hill. They look very similar, but have lower chimneys as they had tiled roofs from the start.

The Charities and Beneficiaries

The buildings are now owned and managed by the Barclay’s and Standon United Charities. They have other properties at Puckeridge and Wadesmill. These are available to men or women of any age who are in housing need and resident in the area of the existing parish of Standon or Thundridge Parish (north of the River Rib). Applicants are accepted as ‘of limited means’ if their only form of income is state benefits or they have limited income. Cats and dogs are allowed. Doubtless they are a boon to some of the residents.

The Charity is registered with the Charity Commission ref 209195. Its objects cover more than almshouse provision. Of the linked charities, only John de Standon is specifically for almshouse provision. His charity dates back to 1658, originally being for general and educational needs. Its current purpose is almshouses for the residence of almspeople who shall be poor persons of good character who are in conditions of need, hardship and distress.

A few appointments have been reported in the newspapers consulted, but no anecdotes.   Please refer to the newspaper list at the end of this article.

Newspapers. These can be accessed on the British Newspaper Archive website

Herts & Cambs Reporter & Royston Crow 16 May 1902 page 8 col 3 A vacant almshouse was assigned to Mrs. H. Martin, and another was practically without a tenant..

Herts & Cambs Reporter & Royston Crow 07 November 1902 page 5 The vacant almshouse was assigned to Mrs. Salmon, from Puckeridge. The meeting consented to receive the balance of £6 12s 5d. from the Coronation Fund offered by the Coronation Committee for the repair of the almshouses, and the clerk undertook to see the necessary repairs were carried out.

Herts & Cambs Reporter & Royston Crow 30 September 1904 page 8 col 2. It was decided not to take any further steps with regard to selling some of the Charity land for building purposes. Three almshouses were vacant and applications for their reoccupation were received from three widows, Mrs. Phillips, Mrs. Manning and Mrs Thurgood.

Herts & Cambs Reporter & Royston Crow 30 March 1906 page 6 Application granted from Mrs. Ilurren, of the Buffalo’s Head, for one of the almshouses.