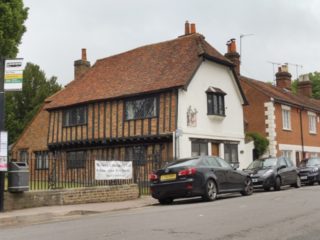 Old Church House as seen from Church Street. The railings to the left of the image belong to the church. 2019
Colin Wilson 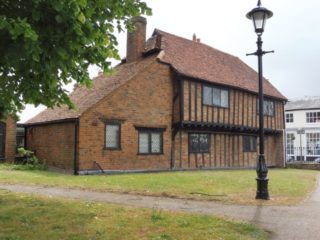 Old Church House as seen from the churchyard. 2019
Colin Wilson 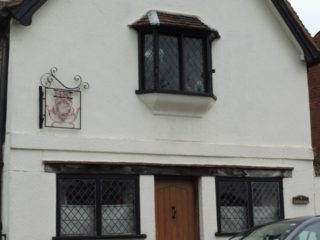 Old Church House at 4 Church Street, just to the east of St Mary’s church, has fulfilled many functions in its time. Originally the village / church hall, it was a school, the workhouse, the post office and the police station (twice). It is now a private residence. The addition to the rear was the lock-up, and later the morgue. For part of its life, from about 1568, it also found use as an almshouse. It is now grade II listed by Historic England, as of December 1983, with a listing reference of 1100928.

Names vary. The building has been known as Church House and Tudor Cottage. Similarly, the street has been known as North Street or Church Street. Carleton is sometimes spelt Charleton, and Peryent is also recorded as Perient.

When it was built is uncertain. The sign on the front, denoting 1450, cannot be relied on as it is new. Historic England, Victoria County History and Pevsner date it to the mid 16th century; other sources, such as Welwyn & District History Society, date it to about 1450. This latter date would make more sense if it was originally used as the village hall, becoming the almshouse in Elizabethan times. Note Chauncy’s comment that the house was converted into an almshouse. Were it built in about 1550, it would have been the church house for less than two decades.

Henry  Chauncy, writing in about 1700, records that ‘Anne, wife of Anthony Carleton Esq, one of the daughters and heirs of Thomas Peryent [of Digswell], gave a messuage and a rood of ground, with the appurtenances, lying in Welwyn, to the repair of this church, and to the relief of the poor of this parish; and ‘tis held that the Church-House, and a pightle called the Anchor Pightle, both of them lying on the east side of the church-yard, is the same messuage and ground aforesaid, whereof the house is now converted into an almshouse , and the rent of the pightle is now constantly disposed of to the use of the poor’. The word ‘pightle’ is essentially an archaic word for a left-over piece of land.

Victoria County History notes that the remaining charities in the parish were regulated by a scheme of the Charity Commissioners of 5 November 1909 under the title of the United Charities. They include the charity of Anthony Charleton, founded by will dated in 1568, now consisting of a house used as a police station, let at £12 a year. This charity still exists (2019) ‘for the benefit of the poor of the ancient parish of Welwyn generally or such deserving and necessitous persons resident therein’. The Charity Commission reference is 206474.

W B Johnson and Gordon Longmead help with some of the dating. The 15th century house known as Tudor Cottage was built as the village hall or church house. By the days of Elizabeth I it had become an almshouse. Soon after 1750 it became the parish workhouse. It was possibly the first charity school, started by Dr Edward Young (rector from 1730). Hence the likelihood is that the building’s use as an almshouse could have been up to around 160 years, though this cannot as yet be verified.