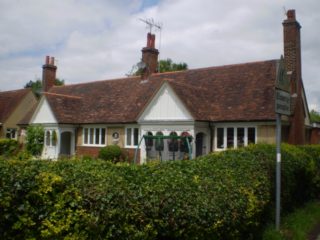 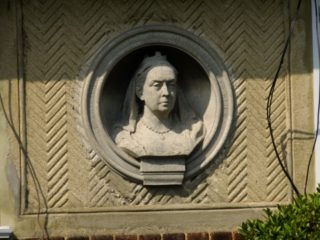 The image of Queen Victoria on the centre of the wall. 2016
Colin Wilson 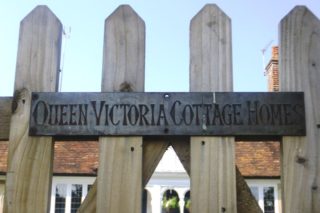 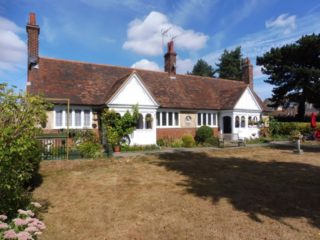 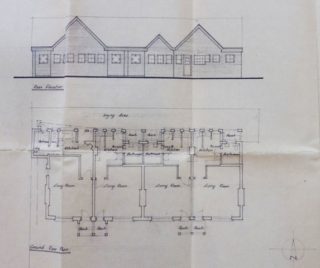 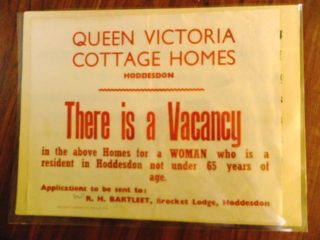 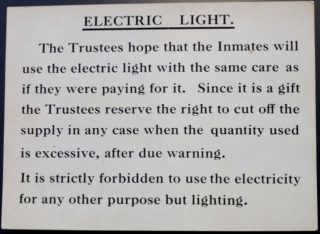 The notice about appropriate use of electricity.
Courtesy of Lowewood Museum 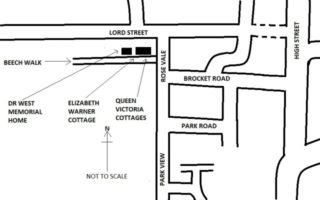 Also known as the Hoddesdon Cottage Homes for Aged Poor, these homes were erected as part of the celebrations for Queen Victoria’s Diamond Jubilee.

The almshouses were publicly declared open in June 1898. A surviving poster indicates they were for women over the age of 65 years, although records show younger residents were admitted. Reasons suggested for poverty were widowhood or leaving service with nowhere to go.

The architect was E Burgess. The half-relief bust of the Queen on the front was the work of Herbert Hampton, a local sculptor. He exhibited a number of works in the Royal Academy and produced a number of works for King Edward VII. A brass plate for the gate was given by Mrs Septimus Warner.

The minutes books and various other documents are stored at Lowewood Museum, Hoddesdon (as at 2018). The plans by Alan Portbury, dated 1968, concern alterations (including the Warner addition) are also stored there.

The information below is mostly extracted from notes of a talk by the then Secretary of the Trustees (c1996), and some of those  documents. They reveal many of the day-to-day issues faced by those running almshouses, maintaining the accommodation and keeping it up to date with limited resources.

Accommodation was a main living room with a bed recess (curtains were provided for the bed), with a kitchen (including a range) and an outside toilet. The toilet doors were relocated in 1947 to give access from the kitchen. Also in 1947 concern was expressed over the use of oil stoves. Estimates were sought for supplying gas rings for boiling kettles. By 1950 new fireplaces were needed to replace the kitchen ranges.

Land at the rear of the cottages was purchased from Hoddesdon Urban District Council in 1965 at a cost of £65.
Bathrooms and hot water were proposed in 1967 and completed in 1972. No 1 was empty for a year while work was being done.
In 1986 central heating was installed. Repairs to the chimneys, roofs, brickwork and decoration amounted to £2880.
£4000 was spent on decorating the exterior and recarving the front porches in 1990.
Secondary double glazing was fitted in 1993.

There are other notes of other repairs and costs.

Sarah Cole 67, Emma Aylott 67 and Elizabeth Morley 70 were the first residents. They moved in on 20th May 1898.
Mrs Cole was admitted in 1902 but a Trustees’ minute indicates that her conduct was deemed unacceptable. A letter was to be sent to her, but no further information is available. Hopefully that was the end of the matter.
In 1932 Miss Ashford was told not to keep any animals, to keep her cottage clean and tidy, and to get rid of her dog within a fortnight. She was also in the habit of leaving her lights on too late. These events resulted in a notice being put up requiring everyone to put the lights out by 9.30 in the evening. A later rule prohibited keeping dogs.
A suggestion made in 1947 was that the next resident could be younger so could help other residents with shopping and other tasks.
There is a letter from the Charity Commission in response to a request for help concerning a resident who was frequently absent. The Trustees were referred to the Charity’s governing instrument. The resident was to be reminded that she was a beneficiary, not a tenant. The letter details the steps which may have to be taken should eviction be the final outcome.

The Trustees contributed a lot of time and effort. The first trustees were the vicar of the Congregational Church, Robert Barclay, Douglas Day Taylor and Howard Warner. It is worth noting how long some of the trustees served, often with little recognition. Doris Goodson was a Trustee from 1967 until 1990. Doug Bishop served as treasurer for 10 years and looked after the buildings. The secretary (who prepared the talk) had been in post for about 8 years. Barbara Peel had served for 15 years. One comment when the trustees were seeking a new organisation to take on the almshouses was that it had become increasingly difficult to find trustees and that most of the trustees were older than the residents. You can feel the pathos in this.

1903 Mr Manser (of The Lynch) left £900 provided the residents were visited regularly. They were to receive 2s. per week.
1906 it was decided to give ½ ton coal for Christmas. In 1974 the coal was replaced with whisky.
1967 Doris Goodson became a trustee. She would give 2s. or 2s. 6d. at Christmas.
1984 Christmas gift tokens were given.
A later document defining the rules stipulates that TV licences would be paid for by the Trustees but that gas and electricity were metered, and residents were responsible for telephone installation and charges.

The building cost of about £600 was paid for by public subscription. Lowewood Museum has a document listing all the contributions, both large and small, for the Jubilee celebrations, a number of entries being specified for the cottages. 104 contributors are listed, giving anything between £50 and 5s.
The site was given free of charge by Robert Barclay, who was also Chairman of the trustees.
An endowment fund of about £140 was contributed to by Messrs Manser, Taylor and Peake. This was for rates and taxes and was administered by the trustees.
1901. Hoddesdon Amateur Dramatic Society gave 10 guineas, the profit from entertainment put on at Bell Lane Baths.
1903. The Priscilla Manser Fund was only to be used for the original 3 cottages. A letter from The Charity Commission dated 1970 records that the original investment was £400 East India Railway 3% stock (sold 1943 in favour of 3% Defence Bonds then 4% Consolidated stock in 1953, and Chelsea Water Works debentures) and £500 3% Loan Stock (then 2% Treasury Stock in 1948).
1947. Hoddesdon Young People’s Club gave of £33 6s. 2d.
1956. An appeal through the Hoddesdon Journal raised £22 2s. Generous donations by Roland Bartleet and W J Haward enabled debts to be paid off.
1968. Bessie Bartleet’s many garden parties and bring-and-buy sales were the main source of income.
1971 Letter from Council concerning improvement grant of £1350 and a loan of up to £2750.
1984. Collecting boxes provided £3 11s. 9d, along with an anonymous donation of £6 15s 7d. A further £1 7s 6d came from local organisations, plus £50 from Tuke Taylor.
1985. Winnie Ashford bequeathed £250.
1988. The Rotary Club donated £600.
1990. Bessie Bartleet died aged 95. She bequeathed £1000.

As will be deduced from the above, finances were tight and probably unpredictable. Cost-cutting measures included such measures as restricting the use of electricity (meters were later introduced) and grassing over some of the flower beds to reduce maintenance costs.

The cricket pitch was very close, and some damage was caused from cricket balls. Apart from damage to property, the residents were unwilling to use the outside area in case they were hurt. This matter was resolved with the cricket club.

The governing instrument was a deed dated 27 September 1897, two deeds dated 17th May 1898 and a scheme dated 27th April 1971.
The Elizabeth Warner Cottage was added in 1906 but was kept separate from the original three homes. Residents in this accommodation paid more than for the other residents as it was larger.
The almshouses were registered under Charities Act in 1962, with a reference of 210209.

The Dr West Memorial Home was taken over in 1973. In 1984 it was decided to combine the Dr West and the Queen Victoria Cottage Homes under one management, under the auspices of The Almshouse Association and The Charity Commission. The accounts for the two charities would be kept separate.

By 1996 it had become increasingly difficult to find trustees. Springboard Housing Association was approached to take over (others had previously been contacted with no result). LEAP Almshouses (Legacy East Almshouse Partnership) was established in 2013 and registered in Feb 2014 (Charity Commission ref 1155672). They took over the management of 6 almshouse charities in 2015 and the almshouses were still active in June 2018, apparently on a sound financial footing. The assets of each remain separate and intact. The Charity Commission reference for the Queen Victoria Cottage Homes is 210209.

Various documents held at Lowewood Museum (2016) including:
Typed notes of a talk by the then Secretary, which are stored at Lowewood Museum. This document has dates up to 1994 but does include a reference to Springboard (c1996).
1971 Charity Commission Scheme and letters from The Charity Commission.
Plans of the almshouses 1968.
A document listing the subscribers.
Some tenancy agreements, which include the rules to be followed.

Websites accessed June 2018
http://www.leapalmshouses.co.uk/
There is also a link from this site to a useful document about the future of almshouse charities. See https://docs.google.com/viewer?a=v&pid=sites&srcid=ZGVmYXVsdGRvbWFpbnxsZWFwYWxtc2hvdXNlc3xneDoyMzA3NmE4YTI4NDBmZmJi