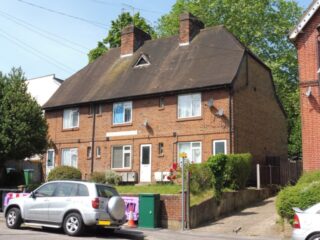 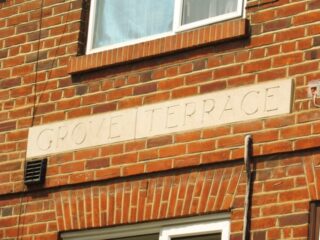 Minutes books are useful as they can give an insight into the details of an organisation’s management. The frustrating aspect is that they tend to record decisions briefly, as bullet points, without recording the discussions and reasons behind them.

The Longley Almshouse Trust was registered with the Charity Commission on 21 Feb 1963. It was removed from the register on 11 Sep 1992 as it ceased to exist. The reference was 214324. The governing documents were a deed of trust dated 26th July 1932, a scheme of 18th January 1980 and a scheme of 26th September 1986. The charitable objects were stated as being the provision of nine rooms for the use of female members of the Methodist Church, of sixty years of age and upwards.

The items below are extracts from the Longley Almshouse Trust minute books 1932 – 1960, which are stored at HALS. They have been paraphrased and regrouped into subject order rather than the original date order so as to pick out certain themes. The sections in square brackets are my own comments.

Jul 20 1932. Mr G Longley, together with Mrs Longley, had three dwelling-houses, known as Grove Terrace, Grosvenor Road, Watford, used and to be used as almshouses. They wanted to vest the same as Trustees so that the property should continue to be used as almshouses for Wesleyan Methodist Chapel purposes. [Does this imply the buildings were in use as almshouses before this date]? A conveyance had already been prepared by Mr Hart, which he was called upon to read. This included some stock, the interest from which could be used for the upkeep of the almshouse.

Mr Longley stated afterwards that during his lifetime he wished to be allowed to fill any vacancy that might arise; this was unanimously agreed to.

Nov 19 1938. There was some discussion about putting the finances on a secure footing. Mrs Longley was to be consulted.

29 Mar 1939. The finances had reached a rather low level. Mr Hart said he did not feel able to contact Mrs Longley about a further grant.

7 Feb 1940. The interest from the investment amounted to about £8 12s. per annum. The account is in the name of ‘Longley Almshouse Trust’.

Jun 6 1952. A grant was obtained from the Greenhill Trust [which was linked with the church].

Jul 18 1955. The cost of adding water etc. was noted. A grant would be sought from the local authority which could allow up to 50% of cost.

Jul 19 1956. Some residents made occasional donations [this is also recorded in other minutes].

29 Mar 1939. The secretary and Treasurer resigned. [Why they resigned is not recorded. This was at the same meeting where the finances were recorded as being at a low level].

Jun 6 1952. The Trust was to be placed on the New Model Deed and a new body of Trustees was to be appointed

23 April 1953. Extra-ordinary meeting to elect new trustees. Previous, new and continuing trustees are listed. 5 had died, 8 wished to stand down, 3 wished to continue. A total of 10 trustees were appointed.

[The minutes record many of the residents’ names. Just a few merit some mention because of issues arising. They have been abbreviated to maintain some anonymity even though all will have passed away by now. One difference from other almshouses is that it seems the trustees operated a waiting list system rather than advertise when a vacancy occurred].

Nov 19 1938. Miss He had now returned to the almshouses. As it was necessary for her to have a companion, it was agreed to accept Mrs Ho as a tenant.

Jun 6 1952. Two new tenants had been accepted. Miss A was to be the next on the waiting list provided no application made by a Queens Road member in the meantime. [This suggests that Queens Road members were given priority, but that members of other Methodist churches were eligible].

Jul 19 1956. No applications for the vacant room had been received.

Jan 24 1957. An application was received from Mrs M, a member of the sisterhood at Queens Road for 23 years. The Secretary was asked to explain to her that no deviation from the terms of the Deed could be made which stated that no application could be considered from a person who had not been a member of the Methodist Church for at least 5 years. [The interesting point here is that she had long-term links with Queens Road church, and less than 5 years earlier Miss A had been put on the waiting list. Why she was refused seems to be an anomaly. Maybe she attended but had not formally become a member, although the minute does say she was a member of the sisterhood].

Jan 23 1958. Miss H, a member of St Albans Rd Church, entered on Oct 28, and Mrs C, from Kings Norton church & former member of Bushey & Oxhey and Abbotts Langley, entered on Nov 25. [As noted above, the provision was not exclusively for Queens Road Methodist church members].

March 1 1950. Electric light has been installed.

Jul 18 1955. A neighbour had helped with the front gardens. This was appreciated.

Nov 1 1956. Bedside switches would be installed. After that, candles would not be allowed except in the case of emergency; a box of candles could be kept in the kitchen. A light could be installed in each lavatory at a cost of £3 10s. All rooms were in a satisfactory condition as far as decoration was concerned.

Jan 23 1958. Mr Harper’s class were willing to do gardening work later in year. Slabs were to be laid on the front paths at cost of £10.

14 Jul 1958. Some church members had helped tidy the front gardens but more help would be welcomed. The amenities at Grove Terrace were below modern standards but financial help could be available (the Trust would have to find 12½%). The idea of reducing accommodation to 5 was not felt to be right due to the problem of rehousing. The best idea was 7 rooms, each with its own kitchen and shared bathroom. The need for a separate kitchen for each tenant was thought to be essential. The original deeds were to be consulted to see if a new clause was needed to alter number to 7. [Note the 1963 Charity Commission details show the provision was for 9 residents]. 1s. a week for electricity was not now sufficient.

Jan 23 1958. The Trust had been welcomed as member of National Association of Almshouses.

Unfortunately no further information has so far come to light.