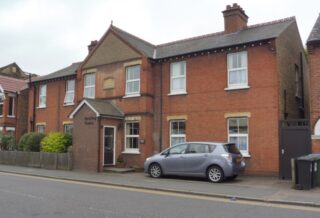 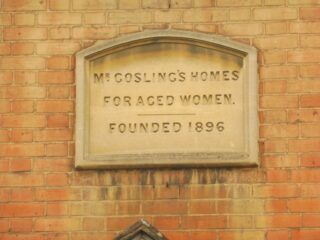 The datestone above the porch on Gosling House. The Charity began in 1896 but Gosling House was built a decade later. May 2017
Colin Wilson

Henry Gosling (c1854 – 1918) was a missionary at the Watford Town Mission in the lower High Street. He visited the elderly and saw many impoverished ladies who were concerned about how to pay the rent for their accommodation.

Mr Gosling’s charitable work began in 1896 and with assistance from some affluent local people he raised funds to rent a cottage; then another and eventually had ten cottages in Watford. He rented rooms at the small sum of 6d. per week and his daughter collected the rents and enquired about the health of each lady. Annual house-to-house collections started and with help from a Mr. A King-Smith Mr Gosling bought land in Cassio Road to build new homes. Mr King-Smith’s daughter laid the foundation stone and the Cassio Road Gosling homes for aged women were opened in 1906.

The single rooms were let to approximately 22 respectable ladies over 60 who had been residents of Watford for over five years. They were required to give two references and be checked over by the Gosling Homes doctor. There was a housekeeper on site and everything was provided for the residents except clothing. There was a bathroom upstairs, cold water upstairs and down and a wash-house in the garden with a copper and mangle for laundry.

In 1959 there was a refurbishment and a bedroom and living room was created for each resident, plus the number of bathrooms increased. Central heating and fire doors were also installed.

Gosling Homes are still occupied and are now converted to 7 flats plus an onsite manager. The criteria now is for “ladies over 50 years of limited means”.

The above article by Janet Golding was published on the West Watford History Group website and I am grateful for her permission to reproduce it.
Information below has been culled from various other sources.

The standard Hertfordshire history volumes do not mention the almshouses as they were built in 1906 hence too late to be included.

Newspaper articles about the stone-laying and opening ceremonies reveal some interesting details. Very few ladies had been asked to leave in the previous decade as they proved not to be respectable enough. Paying a nominal rent had the advantage that those who did not live up to the standards of respectability as the relationship was akin to that of a landlord and tenant. 8 cottages had been used, though it had been necessary for women to access their own rooms by going through others’. The plans for a single house had started 8 years before the opening. The building came to about £1200, plus the cost of the land. Gwendolen Comyns and Jane King Smith laid the foundation stones. The facility was non-sectarian, and residents were allowed to attend any church they wished.  This was also reflected in the variety of denominations present and the source of donations. There was a  comment that politicians had been discussing pensions for many years with little progress. (Pensions of 5s a week were provided for over 70s two years later. That also puts the nominal 6d a week rent into context).

Adverts about collections also appeared. It is interesting to note that they were advertised in the newspapers prior to the collection, and the results published. It shows a positive attitude to transparency.

Gosling’s almshouses were listed as affiliated to the Almshouse Association in a list supplied in 2016.

According to the Charity Commission (ref 220417) the objects of the charity are:
(a) the provision of housing accommodation for beneficiaries (“beneficiaries” means widows, spinsters or unattached ladies who are in financial need who are not less than 50 years of age. Preference shall given to those applicants who have resided in the area of benefit during the last 10 years, or who have relatives living in the area of benefit at the time of the application); and
(b) such charitable purposes for the benefit of the residents as the trustees decide (“residents” mean those beneficiaries of the charity who live in the homes).
The governing document is a scheme of the Charity Commissioners dated 2 Sep 2004.
A note in the accounts reassuringly states that the trustees have a reasonable expectation that the charity has adequate resources to continue in operational existence for the foreseeable future. However the bulk of the income is now derived from rents.
Gosling House (registered as Mr Gosling’s Home for Aged Women) is constituted by a Trust Deed dated 14th November 1933. The Charity de-registered as a Housing Association on 25th February 1999.

The Housing Care website (as last updated in 2003) notes that the accommodation was built in 1906 and renovated in 1995. There are five 1 bed flats, along with a lounge, dining room, laundry, guest facilities, garden. Access to the site is easy.
There are resident management staff and a community alarm service.
As far as local amenities are concerned, the bus stop, shop and doctor’s surgery are 500 yards away, while the post office and town centre are only half a mile.
The charity caters for ladies over 50 able to look after themselves (no smokers). Pets are not accepted.

Note the lower age limit was reduced to 50 years of age from the original 60. The original residential requirement of 5 years was later extended to 10 years (or relatives in the locality)

Further thanks are due to Sarah Priestley of Watford Museum for her help in sourcing the newspaper articles.

https://www.westwatfordhistorygroup.org/2019/07/mr-goslings-homes.html is Janet Golding’s article quoted above, published in July 2019

These can be accessed on-line at https://www.britishnewspaperarchive.co.uk/