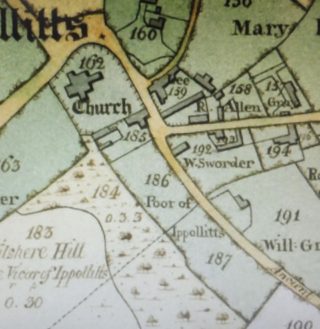 Detail from 1818 Enclosure map. The almshouses are just above the 185 number.
Courtesy of Hertfordshire Archives and Local Studies. Ref QS/E45 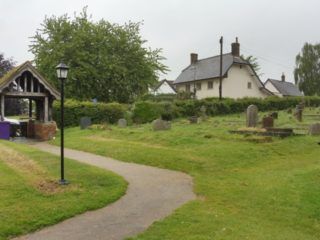 The site of the almshouse. The graves which can be read date from1939 or later. June 2019
Colin Wilson 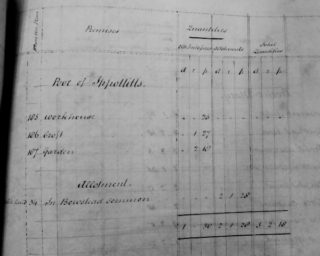 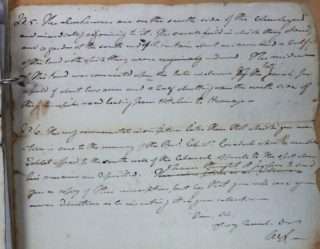 Part of letter from the Rev Lax to Clutterbuck, mentioning the almshouses. 1821
Courtesy of Hertfordshire Archives and Local Studies. Ref CP83/25/1 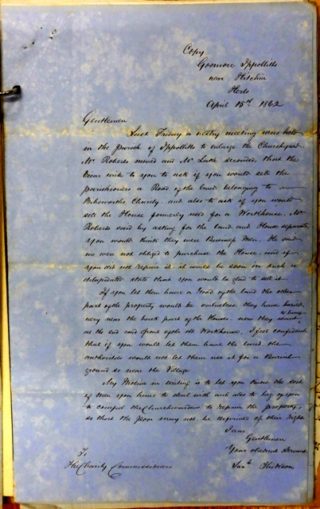 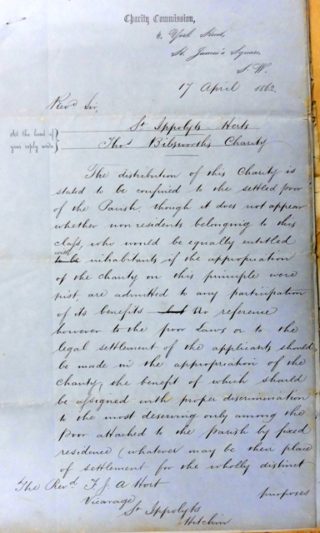 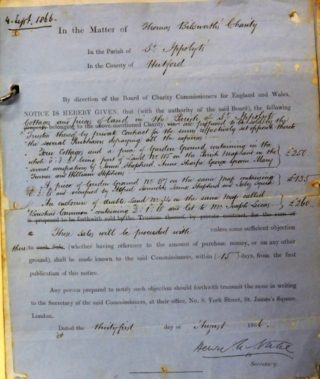 The permission from the Charity Commission to sell the property. 1866
Courtesy of Hertfordshire Archives and Local Studies. Ref CP83/25/1

It seems there was some sort of almshouse provision near St Ippolytts church for over 300 years, from about 1612 till 1934.

Thomas Bibsworth gave 3 acres and 4 roods for the poor in 1612. This land was later exchanged for land at Bowstead Common, on the north side of the Hitchin to Stevenage turnpike road. There was a house, occupied at the time by Robert Tristram but later used as a poor house, along with 11/2 acres of land. Of this land 1 acre was let out for a guinea per year.

The phrase ‘for the use of the poor’ usually meant that a property was let and the income used to support poor people. This may be the original case for Bibsworth’s gift. The extra issue is that the phrase ‘poor house’ sometimes refers to an almshouse, sometimes to a workhouse.

It seems there were three cottages adjoining the churchyard, just to the left as you go through the present day lychgate, which were the almshouses. Further on, before the kissing-gate, were the workhouse buildings. John Spencer and others were trustees. The deed was renewed in 1656. By then there were no trustees, so the churchwardens and overseers of the poor took charge. Payments could be made at the discretion of the trustees, who did not have to regard the legal place of settlement as a factor.

The Enclosure map award of 1818 refers to plot 185 as a workhouse, and plot 186 as a croft. A Commissioners’ history specifically says the four cottages were for the poor to live in rent free, suggesting an almshouse. Maybe the house originally occupied by Mr Tristram was later used as a poor house, while the cottages were almshouses, or vice versa. This matter is discussed below under The Almshouses 1863 – 1934.

The three cottages adjoining the churchyard (by then 200 years old) were pulled down in 1818 and replaced with four cottages for the poor to live in rent free. By this time William Proctor had become one of the Overseers of the Poor. The cost was borne by the parish. Daniel Rudd was awarded the contract. His bid of £167 was not the cheapest, but he had previously done work for the overseers. He in turn subcontracted the job to William Hill of Hitchin. The building was to be demolished by the end of July, and the new one ready for occupation by 28th October, a timescale of just 3 months. 12s was paid to Prime for the use of his barn while the rebuilding too place. Other incidental costs were £1 14s 6d for a new flock bed & bolster, £1 for 3 blankets, 4s 6d for a straw bed, 4s 6d for a square table and 6s for 3 chairs.

A letter from the vicar, Rev. Lax, to Clutterbuck in 1821 provided the information that the cottages adjoined the south side of the churchyard, with an endowment of 11/2 acres. By that time Lax had been the vicar for 20 years so no doubt knew the area well.

Clutterbuck said there were two almshouses. He cites, ‘Some person or persons now unknown gave two almshouses and four acres of land contiguous thereto to this Parish. These almshouses are situated on the south side of, and adjoining to, the churchyard. Part of this land was exchanged upon the Inclosure of this parish in the year 1811, for a field of about two acres and an half, abutting on the north side of the turnpike road leading from Hitchin to Stevenage’. He was writing only  a few years after the rebuilding, yet implies the cottages had been used as almshouses for some time before that.

By about 1860 the churchyard needed extending. In April 1862 a formal offer was made for the property formerly used as a workhouse (note the description). By then burials had taken place right up to the side of the building.  The offer for the house was made as an extra, but if it was refused the buildings would become derelict and unfit for sale. The site was shown on the parish map Inclosure Awards as plots 185 – 186. Four dwellings were still shown on the 1922 OS map, next to where the lychgate is now sited. These were the almshouses, the workhouse being sold.

Some property was sold in 1863 and 1866. The land was sold to Mrs Amos and Joseph Lucas for a total of £645, following an independent valuation. The money was invested in 3% consolidated stocks and Mrs Amos gave the land to the church.

Four buildings were still shown on the 1924 OS map, Hertfordshire XII.6, next to where the lychgate now stands.

In the introduction to the Memorial Inscriptions book about Ippollits, Daphne Rance provides the information about the later history. The path from the lychgate to the kissing gate marks the boundary of the original graveyard. Two ancient houses from Thomas Bibsworth stood close to its left hand side. Both were divided. One provided cottages for the deserving poor, the other was a workhouse. The workhouse part was demolished in 1863. The other was ‘left, leaving the residents surrounded by the (extended) churchyard. It must have been ‘interesting’ to actually live in the churchyard. These cottages were vacated and demolished by 1934. This clarifies the issue raised earlier in this article about the almshouse and the workhouse. There were buildings for almshouses and the workhouse, and the two were divided to make four. Clutterbuck only referred to two dwellings as he was concerned with charitable trusts, not workhouse provision.

The charity was removed from the Charity Commission register in August 2005 as the funds were exhausted. The reference number was 207525.

The History & Antiquities of the County of Hertford, by Robert Clutterbuck
Vol 3 p66
Printed by and for John Bowyer Nichols, 25 Parliament Street, London, 1827

CP83/25/1 Bundle of papers including a typed history by the Charity Commission (dated 1937), sale documents and a letter to Clutterbuck. This bundle is held at HALS