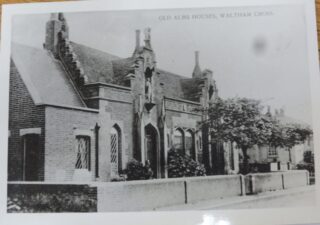 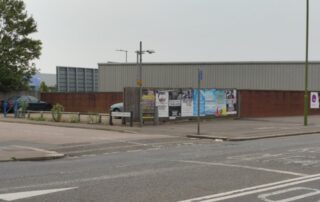 The site of the Spital almshouse. The grey signboard by the tree is a sign on the southern carriageway of the M25. The wall is over the entrance to the M25 Holmesdale Tunnel. Aug 2016
Colin Wilson 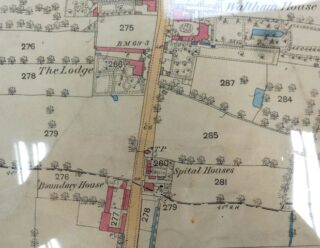 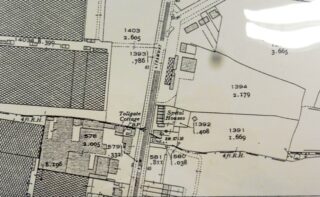 Map showing the Spital almshouse in 1935, after the tram line had been constructed and the almshouse moved
OS 25" map Hertfordshire XLI.12 1935. Courtesy of Hertfordshire Archives and Local Studies

The Spital at Waltham Cross was occupied by ‘aged and over-worn Captaines and gentlemen by birth and calling’ according to the 1612 ‘A Life of the Earl of Salisbury’. The Cheshunt parish registers mention that a boy from the Spitle-howse was buried in 1560, just 2 years after Elizabeth I became queen,  and a poor woman buried in 1589. The ages may suggest a medical care aspect rather than a residential almshouse.

A 1650 Government Survey stated the building had existed ‘for time out of mind for poor, lame, impotent people.’ Other sources cite building dates as 1600, 1620 and 1625. Later the residents were reported as being 4 widows, 5 after 1908, from Cheshunt.

The London Environs (1796) cites a survey of Theobalds manor. It describes an ancient spital at Waltham Cross, ‘consisting of four rooms below and three above, by prescription and time out of mind, appropriated for poor lame impotent people. It is still used for the same purpose, (being occupied by four poor widows), and is held under the manor of Theobalds, to which it pays a small quit-rent’. The implication is that the original building was of two storeys, allowing for the large number of people noted in the next paragraph.

It seems they were rebuilt using red brick in 1728, with some original parts kept.

By 1830 they were very dilapidated so were pulled down and rebuilt at the cost of £434. 8s. The 1830 Beaumont Minute Book proposed that the almshouses should be pulled down as being impractical to repair, but in 1831 there is a note of thanks to William Clarke for his gratuitous services for exercise of professional skill and taste in the construction of the new Spital houses. The style was fairly ornate, with decorated side panels to the doors and statues above the doors.

The building was expanded in 1903 in celebration of Edward V11’s coronation (hence some references to the King Edward VII almshouses). The same photo from 1905 can be found in Rooke’s book p15 and Edwards fig 2. The cost was borne from the Coronation Festivities Fund, with endowment provided by the Beaumont Trust. The additional room meant that 5 persons could now live there.

By 1908 the road width of 38ft was deemed too narrow at that point to allow trams to reach Waltham Cross. Hence the buildings were pulled down and six new buildings erected a little to the east. The statues were inserted into garden walls. The cost this time was borne from compensation from Hertfordshire County Council.

Toilets and bathrooms were added at the back in the 1960s.  Demolition came about in 1979, to make way for the M25 motorway.

It was in 1859 that the Spital almshouses came under the control of the The Beaumont Charity, a charity offering housing for people of Cheshunt over the age of 60 and in need both financially and physically. They had to be of good character.

Various provisions have been recorded, some of which were shared with the Turners Hill almshouses. Salmon notes that land at Waltham Cross provided £3 a year for the poor of Spital House. Mrs Elizabeth Auber 1814 gave £500 Navy stock, the interest to be paid to the poor of the Alms and Spital Houses. Mrs Frances Leeson gave the £400 to the trustees of the Beaumont Charity for the benefit of the poor in the Alms and Spital Houses for ever. In 1882 Henry Timson and Philip Augustus Browne, by deed, gave £540, now represented by £516. 0s 11d of 3 per cent local loans stock, the annual dividends, amounting to £15 9s. 8d., being for the benefit of the inmates of Turner’s Hill almshouses and of the Spital almshouses.

The almshouses had a maximum of 4 inmates, poor widows aged 60 or over, of good character. They were placed by a majority of the trustees attending the meeting when the decision was made. Each widow was to be paid 4 guineas (or other sum according to net income) each quarter, 1 quartern loaf of bread each week and 12cwt coal each year. This was approved by the Charity Commission, sealed 19 Jun 1874. A supplementary note 1874 says that trustees had to be resident in Cheshunt or within a distance of five miles therefrom.

In April 1859, an almswoman by the name of Lawrence left home on Friday evening, and removed from the nearby New River the following morning. The inquest was held but the verdict not reported in the press so the suspicion is that foul play was not involved. A different report was made in 1887, for Queen Victoria’s Gold Jubilee. Celebrations were held on Albury Field, and Mrs Bailes provided a carriage for the almswomen. Hence they were able to join the procession, and had tea at the field.

While the almshouses were demolished in 1979, they still exist in a sort of way as Homeleigh Court was built to replace both the Spital and Robson’s almshouses.

Cheshunt, Past and Present, by Edwin Macleod Carey
p89
c1911, transcribed by Peter E Rooke Feb 1955. This is a typed book, held at Cheshunt library

The History & Antiquities of the County of Hertford, by Robert Clutterbuck
vol 2 p122
London 1827
Printed by and for John Bowyer Nichols, 25 Parliament Street, London

Documents held at HALS. Not consulted at the time of writing.

D/EDs/4/8 Beaumont Charity Scheme collection of documents
Page 2 refers to the Spittle Houses and the almshouses.
Page 9 the almshouses to have max 4 inmates. To be poor widows aged 60+, of good character.

http://www.albury-field.demon.co.uk/spitfull.jpg. Includes a picture, but not able to access the site Oct 2021

https://thebeaumontcharity.co.uk/history-of-cheshunt-almshouses. Includes a note that compensation for demolishing almshouses used to pay for Homeleigh Court

Newspapers can be viewed on the British Newspaper Archive website.