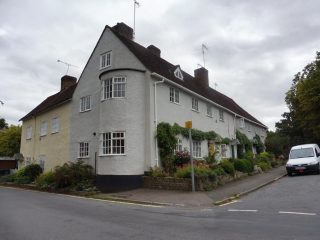 Church Cottages. The cream building is in what was High Road; the grey part is opposite the church. Sep 2016
Colin Wilson 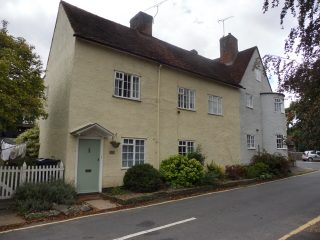 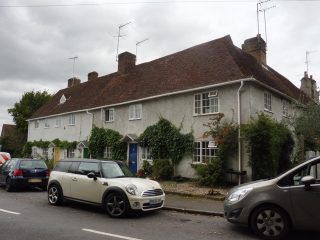 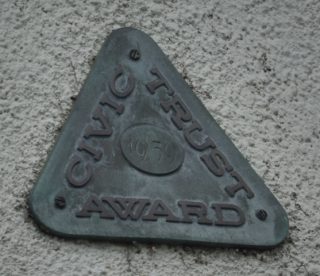 The plaque on the wall between Nos 2 and 3 Church Cottages. Sep 2016

‘This old terrier speaks of almshouses in connection with the churchyard, and in another terrier seventy-five years later we find mention of the ‘poor house in the churchyard’, and the same words occur in another dated 1794. The building which served as the poor house in later times, till the establishment of unions, stood on a piece of ground opposite the church which belonged to the parish down to 1878. I do not think that this latter poor house is the one meant in the old terriers, but I imagine it is what it professed to be – an almshouse standing within the churchyard, and the inmates were then transferred to the house on the other side of the road. I have heard that there is a tradition in the parish that Essendon once had almshouses, and that there was a stone on which this fact was recorded, but I have not been able to trace it’.

The above text, an extract from a three part history of Essendon by H. R. Wilton Hall, has been transcribed from Hertford Mercury and Reformer 05 June 1886. The terrier mentioned in the first sentence is undated, but counting back from 1794 it may refer to events of about 1700 or earlier. A terrier is a land survey, particularly linked with church rights. After all, tithes were an important source of income.

As far as the site is concerned, the almshouses were originally in the churchyard. The 1878 OS map seems to show a building to the north west of the church, but it is not clear if it was within the church boundary. What is now Church Cottages is shown.

There is a reference to an almshouse, but the reference to the Union raises a question. The 1836 Poor Law enacted that areas would be combined into unions so that a single workhouse could serve a region, thus saving money. ‘Poor house’ was used to describe almshouses or workhouses. The situation in Essendon cannot be verified, but looking at other places the almshouse sometimes became a workhouse (see Hertingfordbury), and at Hunsdon the almshouse residents were transferred to the workhouse buildings after the paupers were moved elsewhere.

At any rate, it seems that the almshouse was situated within the churchyard, (see Wilton’s article part 1), but the residents transferred to a building on the road opposite (the build date predates the original almshouses). This is likely to be the building now known as Church Cottages. This seems to agree with Wilton’s text. However, the Poor House provision disbursement book 1831 – 1834 refers to an annuity dating from 1793 for the erection of a poor house.

As Wilton reports in 1886 that there was a tradition that Essendon once had almshouses, the inference would be that they ceased some time before. 1850 would only be 35 years before he was writing, and well within memory. So if the poor house or workhouse was used as an almshouse after 1836, its use ceased within a few years. The building was no longer church property after 1878.

Church Cottages are listed by Historic England. Listing took place in 1983, reference 1348140. The entry records them as probably former almshouses. Built in the 17th century, they were restored c1959. The buildings are arranged round three sides.

Clutterbuck, Cussans and Victoria County History make no reference to this almshouse. Little can be made of this omission as they tended to record provision by specific people or charities, not mentioning church or local council provision.