You are here: Home>Herts history>Places>Almshouses>Royston. Mary Barfield and Charles Beldam 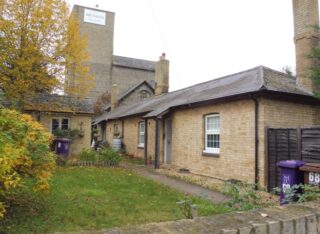 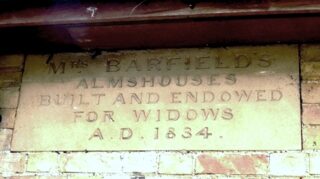 The datestone on the original building. Mar 2017
Colin Wilson 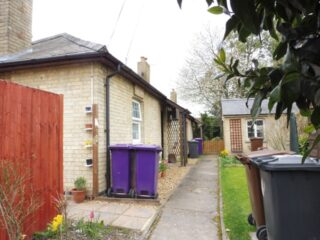 The later almshouses. The Beldam almshouse is nearest the camera. Note the datestone above the window. Mar 2017 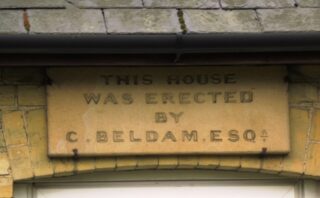 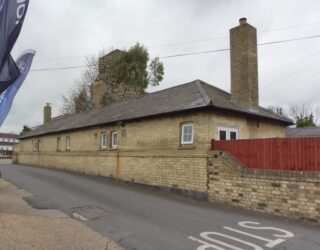 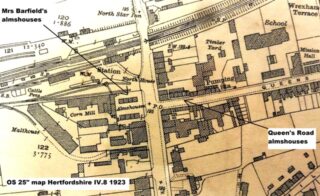 OS 25" map IV.8 1923 showing the location of the Barfield and Queen's Road almshouses
Courtesy of Hertfordshire Archives and Local Studies

Mary Barfield was the wife of Rev Abraham Barfield, the first congregational minister of Ashwell, who also ran a boys’ school at Royston. He resigned his ministry in 1803. They moved to Enfield, where he later died. Mary later returned to Royston and became a governess to the Beldam family. It seems that she died at Colchester.

Her will of 1834 made provision for almshouses at Bassingbourn which she had founded in 1833. If this is the will noted in the references, there seems to be no specific reference to any almshouse, but provision for the poor from the residue of her estate after other bequests had been settled. The likelihood is that these are the almshouses she founded near Royston railway station (although the station wasn’t opened until 1850). While Victoria County History cites her almshouses as being in Bassingbourn, it seems that Bassingbourn stretched further south than nowadays, reaching what is now Royston railway station. Bassingbourn itself had no rail access. The Elbourn Memorial almshouses in Bassingbourn were not built until 1950.

The beneficiaries were widows aged 60 years or over, residents of Royston.

Originally there were 4 dwellings. The datestone for Barfield’s almshouses is dated 1834, noting they were endowed. A further 4 were added later, three of them financed from the Barfield Trust’s accumulated funds and one provided by Charles Beldam. Beldam’s datestone merely says he erected it. This was in 1858. The final layout was two rows of dwellings facing each other, with a garden area between and an extra building across.

Mary’s will was under dispute for some years. However, there is a record that 4 widows were appointed in 1856. The endowment consisted of £4,022 4s. 4d. India 3% stock in the name of the official trustees, producing £120 13s. 4d.  a year. The endowment provided for 5s. a week and a ton of coal a year for each occupant.

In about 1991 the almshouses ceased in their function and became privately-owned properties. The advertising in 2021 suggested the likely buyers would obtain them as buy-to-let properties rather than main homes. Their location so near the station would be a major factor for London workers with frequent direct trains to Kings Cross. The journey time in early 2022 was about an hour.

Estate agents’ bulletins throw some light on the almshouse layout. The single bed-sitting rooms were about 4 metres square, with a kitchen and bathroom. The latter may well have been originally a storage area; bathrooms and inside toilets were hardly common in the mid 1800s. While the buildings are not of national significance, they are regarded as significant in the local context.

Newspaper articles reveal some of the incidental features about people. James (or possibly Arnold) Jacklin died in Dec 1894 age 85. He had been a trustee of both Barfield’s and Queen’s Road almshouses for some time. An Urban District Council meeting in 1909 was discussing snow clearance. Mr Gimson, a representative of the Barfield almshouses, reported that he always sent a man to sweep the path. It appears that other local residents did not clear their paths. Fire was always an issue in Victorian times, but the fire in Mrs Harrudence’s room was unusual. It was supposed that a spark from the chimney of the nearby steam mill had ignited the soot in the chimney. A Mr Chamberlain lived across the road. He was called for help at various times.

Death notices indicate that a number of residents lived to a good age. Ann Anderson died age 74 in 1901. The inquest decided the cause was abdominal haemorrhage, with long-term damage to one kidney. Lydia Drury, a local nurse, attended and authorised that a screw be put in the coffin. For this she was admonished by the coroner. While the body could be put in a coffin, it could not be screwed down until the coroner gave permission. A Mrs Martha Pearce lived to 97, dying in 1904.

The Mary Barfield Charity still survives (Charity Commission ref 222095). Its objects are to relieve poor men and women of any age who are resident in Royston, Bassingbourn, Dedham or Colchester, who are in conditions of need, hardship or distress either in gifts in kind or grants of money.

There is also a Mary Barfield House in Royston, providing extra care housing for people over 55. The 17 flats were built in 1999. They are run by Notting Hill Genesis. This is not part of the Mary Barfield Charity but they are the contact for the charity from the Charity Commission website.

Newspaper articles. These can be viewed on the British Newspaper Archive website at https://www.britishnewspaperarchive.co.uk/