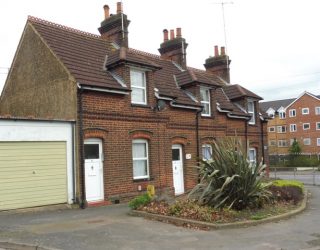 Mary Bailey Smith's almshouse from the north west. The new building in the background is known as Lammas Lodge. Feb 2017
Colin Wilson 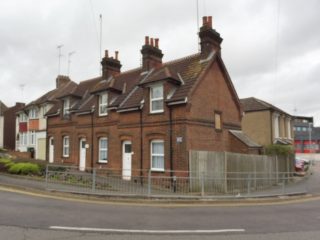 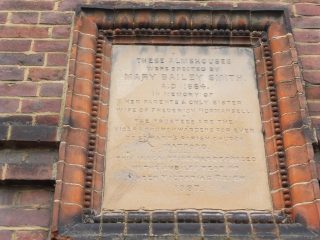 Mary Bailey Smith spent most of her 77 year life in Watford. Following an illness lasting some years, she died in 1894, the last of her family and the last person to be buried in the Parish churchyard.

The dedication stone on the end of the building reads: ‘These almshouses were erected by Mary Bailey Smith A.D.1884 in memory of her parents and only sister wife of Frederick Normansell. The trustees are the vicar and churchwardens for ever of St Mary’s parish church Watford. This inscription was recorded in the Jubilee year of Queen Victoria’s reign 1887’.

Her almshouses, built in 1884, were dedicated to her parents and to her sister, who was married but died childless. Three old cottages owned by Duke of Bedford were demolished so the almshouses could be built on the corner of Farthing Lane, near her house, Lammas Lodge. Mary provided £1500. This sum was increased by £2500 in her will to provide for repairs and an allowance for the residents.

It was reported that her Christian character and deeds were well known, and that she acted up to the true principles of Christian charity. Mary was active in Sunday school provision and had also provided the land and most of the cost of building St James mission church in 1893.

She assigned the three cottages or almshouses and land adjoining, in trust to the vicar and churchwardens of St Mary’s church. They were to be occupied by widows or spinsters, members of the Church of England. They had to be more than sixty years of age, and have been inhabitants of Watford Town Hamlet for ten years previous to their admission. They would receive 5s a week.

The charity continues, but the accommodation has been managed since 2011 by Paradigm Homes Charitable Housing Association Ltd, who are listed as the trustees. This organisation is part of Paradigm Housing Group Ltd, a large housing association covering much of South East England.

The charity is affiliated to the Almshouse Association, and registered with the Charity Commission ref 239523. The charity does not raise funds from the public, but (as at 2019) has an income of about £10,000.

Newspapers. These can be viewed on-line on the British Newspaper Archive website

Watford Observer Saturday 16 September 1893 page 4 col 5.. example in this lady, who had lived nearly all her life in Watford. The Rev. gentleman then made a brief reference to the almshouses which Miss Bailey Smith had built and endowed. Mr. Foster (of Watford Fields) spoke of the liberality of Miss Bailey Smith …
Watford Observer Saturday 27 October 1894 page 4 col 4 includes an obituary
Herts Advertiser Saturday 29 December 1894 page 5 col 2 includes details of her will of 29 Dec 1883 plus codicils.