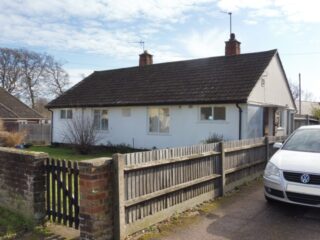 Collison House, St Ippolyts. The dedication stone is under the eaves between the large windows. Feb 2018
Colin Wilson 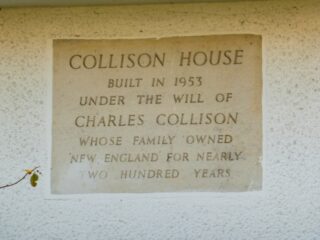 A link between New England, St Bees, Hitchin and St Ippolyts is Charles Collison, but at first sight that link is unclear.

Charles Collison’s will was drawn up in 1947. He died 4 years later in 1951. If I’ve got the correct record from the Whitehaven district , he was then 84 years of age. After various bequests the residue of his estate was left to the vicars of Hitchin and St Ippolyts so they could erect and maintain homes of rest for deserving residents in the parishes. Two of these residences were built in Waterdell Lane, St Ippolyts, in 1953. Paul Mauger & Partners, of Welwyn Garden City, were the architects, who also designed the Coralie Glyn almshouses in Welwyn Garden City.

Tenancy agreements are held at HALS. They include details of the maintenance required of residents. They could be required to vacate the almshouses with 1 month’s notice, or immediately in the case of insobriety, causing annoyance to others or coming into funds whereby they could live elsewhere. Cats, dogs and poultry were prohibited.

C F Burr and Sons carried out some repairs and decoration in 1959. A detailed specification was provided. Residents were allowed to choose their wallpaper subject to a price limit.

A chance meeting with a resident in 2018 provided the information that they were then in private ownership, and that he had lived there for the last 7 years.

The charity is affiliated to the Almshouse Association and registered with the Charity Commission ref 209758.

And so to the dedication stone. It has the intriguing words that the Collison family owned New England for nearly 200 years. The obvious reference is in the USA seems rather far-fetched. Further investigation reveals New England House, on London Road, on the border between St Ippolyts and Hitchin. It is a listed building, ref 1175154, but the listing does not give details of owners. Victiria County History refers to a hamlet called New England in the parish, but similarly does not provide names. It must be accepted as a far more credible reference to New England and explains the St Ippolyts and Hitchin link. Charles spent at least the later part of his life at St Bees, in Cumbria.

Readers are also referred to the article Hitchin. Charles Collison.

DE/Ha/B2005 Various letters about repairs and decoration. Letter from Council to say rates relief would cease but other concessions may apply. 1957 letter from J C Girle of Little Almshoe asking for admission for him and his wife. They had been on a list for 6 years.