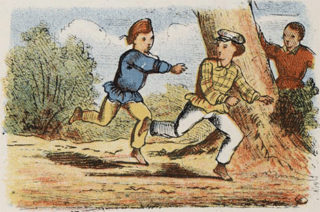 Like children everywhere in the world, the children of Hertfordshire passed on games from generation to generation. Traditions of children’s games are rarely deliberate. The usual pattern is simply that younger children will join in the games being played by those a couple of years older, and will then pass them on in their turn to their juniors. In this way, games can often survive for centuries with few changes.

In Essendon, a game called “The Bull’s Warning” has been played for generations. A little like the more widespread game variously called “tag”, “he” or “it”, this involves one child trying to catch the other players. In this case, though, a series of rituals have to be followed.

One boy is chosen to be the “bull”’. Putting his hands together, palms and fingers touching but with thumbs crossed, he announces, “Bulls warning, cows warning, a bushel of wheat, a bushel of rye, coming now, or by and by?” When the other children shout, “Now,” he sings, “I cock up my fingers, I cock up my thumbs, I touch the ground, and away I comes”. Having performed the preliminaries, he tries to catch the rest of the children. As each is caught, the children join the line until only one is left, who then becomes the bull.

I grew up in Cheshunt in the 1950s and 1960s, attending Burleigh Primary School and Cheshunt Grammar School (now a housing estate, unfortunately). Some of the games we played were universal, such as tag (which we usually called “he”) and hide-and-seek, but a few were less common.

One game I recall playing a lot was known as dusty, which was essentially a form of tag where you “had” someone by throwing a ball and hitting them. We were supposed to only use a tennis ball or softer — and sometimes we stuck to that. The game came in two forms: “one-man dusty”, where you passed on being “he” to the person you hit, and “all-man dusty”, where those you hit joined your team. In that version, as soon as there was more than one you were no longer allowed to run with the ball — you had to stand and pass it.

Children generally adapt their games to the landscape they play them in. At Burleigh School, the asphalt playground had a wall at one end which was incorporated into the rules of a whole range of games, either as “home” or as a target that had to be touched at certain times. Similarly, there was a location in the grounds of Cheshunt Grammar where ball games were traditionally played. This was a place where two blank walls met at right angles (the “New Block”, if anyone remembers that, before still newer blocks made the name inappropriate), so our rules incorporated complex combinations of which wall had to be hit when.

Do you remember childhood games you played in Hertfordshire, whether unique or common? We’d love to hear about your memories.