You are here: Home>Herts history>Places>Pubs>Contrasting Tales of Troop Behaviour in Bishops Stortford 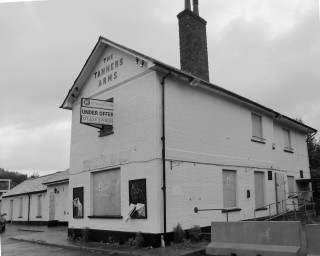 On 27th February 1915 at the Bishops Stortford Urban District Council meeting, a ‘Thank You’ letter was tabled from a Major General Stuart-Wortley, Commandant of the 1st North Middlesex Division Territorial Force. The Chairman (Curruthers) said the men had behaved splendidly and commended their sobriety. He could truthfully say he “had not seen one instance of drunkenness amongst so large a company of men”. The Superintendent of Police – with 33 years experience – said he considered the conduct of the troops in Bishops Stortford “most excellent”. The drill hall was being used during the evening for recreation, refreshment, and such activities as chess and draughts.

On 13TH March 1915 at Bishops Stortford Petty Sessions, a renewal of the License of the ‘Tanners Arms was discussed. On 19th December 1914 the public house had been put “out of bounds to the Military” for 9 days following an incident involving 60/70 customers when it had to be closed at 9.00 pm.

The landlord said he had experienced great difficulty in clearing the bar areas, which filled again behind him. When the Military Police arrived those inside refused to give their names and made a dash for it.

As a consequence, some Christmas leave was withdrawn.