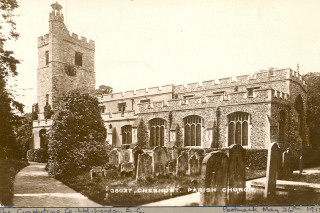 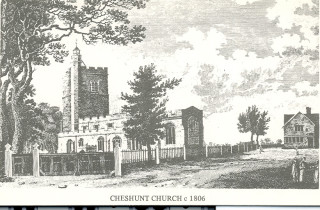 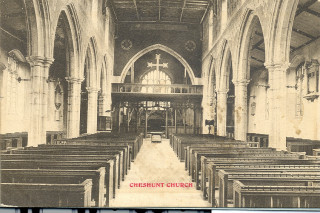 The 15th century Parish Church of Cheshunt is in Churchgate, at the centre of the conservation area. It’s surrounded by listed buildings, but the church itself is the only grade I building in the area.

It’s recorded in the Domesday Book, in 1086, that Cheshunt had a priest, and a church is mentioned in documents dating back to at least the 12th century. In 1331, a chapter of the Augustinian canons was held at “Cheshunt church”, apparently because the abbot of Waltham Abbey at the time was “rebellious”.  No record survives of its location, but the chances are that it was in the same general area, close to the old manor house.

The present church was built between 1418 and 1448, while Nicholas Dixon was the rector. Although it isn’t recorded why the rebuilding took place, it’s possible that the church, like many others, had fallen into neglect during the chaos following the Black Death. It may have been at this time that the dedication was changed from St John the Baptist, which appears in some early documents, to St Mary the Virgin.

There are many monuments and family vaults, both inside the church and in the churchyard surrounding it, including one for the Cromwell Family of Cheshunt Park, descendants of the Lord Protector, as well as memorials to various local families, including the Dewhursts, the Russells, the Dacres the Meux and the Dodsons. The church also contains a memorial to Nicholas Dixon.

St Mary’s Church is a fine example of gothic architecture, and its interior has an atmosphere fitting a medieval church. I well remember the annual carol concerts held there by my school (Cheshunt Grammar) in the 1960s and 70s. The beautiful, almost Dickensian location set up the right feeling, and the church’s splendid acoustics helped to make the choir, congregation, booming organ and brass ensemble as magnificent as any more prestigious event.

Whether or not you’re a worshipper, St Mary’s is well worth a visit, both to see a fine medieval church and to feel the atmosphere of a building used by nearly six hundred years of Cheshunt’s people.