The road-builder's connection with Hoddesdon 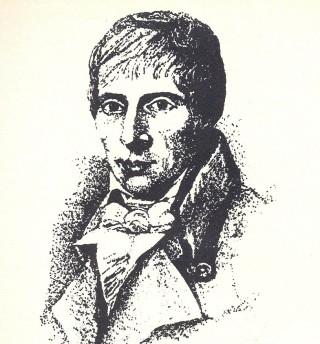 John Loudon McAdam
From a print published in 1901, reproduced in This Hertfordshire 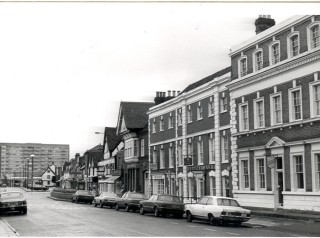 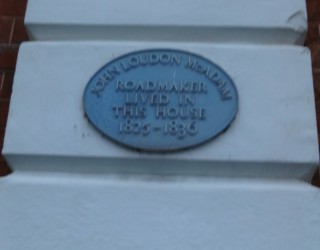 The father of modern roads, John Loudon McAdam, was born in Ayr, lived in New York and Bristol and travelled all over the country, building and improving roads.  However, for the last nine years of his life, McAdam’s home was in High Street, Hoddesdon.

Born in 1756, the youngest son of James McAdam, a Scottish Laird who established the first bank in Ayr, McAdam showed an interest in road-building at an early age.  According to one story, he built a model road while still at school.

After his father’s death in 1770, he was sent to New York, where he worked in his uncle’s office, later marrying Gloriana Margaretta Nichol, by whom he had seven children, and eventually returning to Scotland in 1783.

McAdam settled in Ayrshire, where he acquired a number of prestigious posts, including that of Deputy-Lieutenant of the County.  In retrospect, however, his most important appointment was as a trustee of the Ayrshire Turnpike, in which capacity he involved himself in the problems of road construction.

In 1798, he moved to Bristol, but much of his time and resources was spent travelling the country, examining and comparing systems of road construction and repair.  He became a recognised authority on the subject, but sought no personal gain from the advice he offered.  Nevertheless, he was eventually appointed surveyor to the Bristol Turnpike Trust in 1816.

The standard of the country’s highways was a major problem at the time, restricting the effectiveness of the coaching network.  Improvements had been made, notably by John Metcalf (“Blind Jack of Knaresborough”), but more was needed.  McAdam published two treatises, Remarks on the Present System of Road-Making and Practical Essay on the Scientific Repair and Preservation of Roads, in which he argued that roads should be raised and built with a camber, constructed from crushed stones bound with gravel on a base of larger stones.  Although improved since, notably by the use of tar (to form tarmac), this is essentially the construction method used today.

McAdam was appointed Surveyor-General of Metropolitan Roads in 1820, although Parliament was less generous in ensuring that he had sufficient expenses.  Between 1825 and 1827 (the dates given vary) he came to live in Hoddesdon, in a house close to the present Post Office.

Two reasons appear to have influenced his decision.  One was that it was the home of Anne Charlotte Delancy, who became his second wife.  She was a woman of American extraction whose brother-in-law was the author James Fennimore Cooper, author of The Last of the Mohicans, who is said to have visited the couple in Hoddesdon.  There’s evidence that some of McAdam’s family bitterly opposed the marriage.

Secondly, Hoddesdon was the home of his friend and collaborator, George Allen, a toolmaker who constructed road-making tools to McAdam’s design.  Among these was a gauge ring, used to ensure that the stones were broken to the correct size.  Allen’s son recalled that his father “once asked Mr McAdam what the stone-breaker was to do if he happened to lose the ring; to which he received the following characteristic reply: ‘Why, George, let him try the pieces in his mouth.  If they will go in they will be small enough.’”

McAdam maintained a house in Moffatt, Scotland, where he spent part of each summer, and it was there he died in 1836, aged eighty.  There is a memorial to him in Broxbourne Parish Church, describing him as “the great improver of British roads”, while his Hoddesdon home, now called Montagu House, bears a blue plaque.

John Loudon McAdam was said to have had a short temper with fools and opponents, but to have been mostly a kind, gentlemanly man.  He spent a considerable amount of his own money on his road-building schemes, asking no reward (he refused a baronetcy in 1827) and receiving very little.

He died poorer than he was born; but every person in the United Kingdom and beyond who takes for granted that there are roads to use owes McAdam a vast debt of gratitude.