On Friday the 8th March 1991, Royston made national news headlines when it was rocked by numerous fires and explosions caused by a gas surge. Human error had led to the network of high pressure gas which carried gas supplies between towns being connected directly to the network supplying Royston houses. This link resulted in a massive surge of high pressure gas entering the system in the town at approximately 5.15pm. 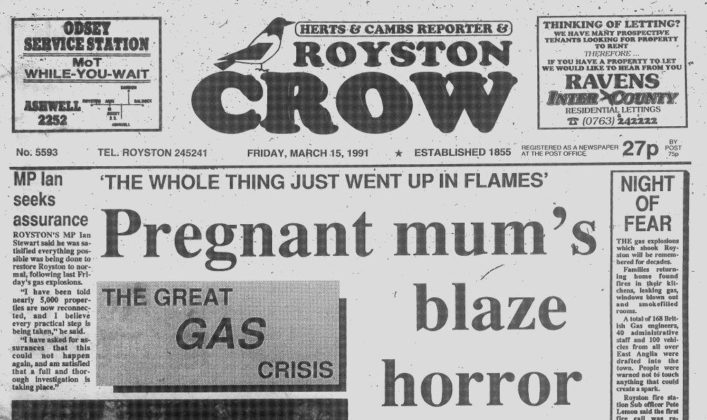 People reported gas cookers exploding and blazing gas fires causing much damage to kitchens and living rooms. Many people had lucky escapes as they lit appliances, unaware of the ongoing crisis. Within the first hour over 300 emergency calls were taken, and the Fire Service were called to about 60 incidents.

Sparks from engines and naked flames had to be avoided and so all roads into Royston were closed and the town was shut off to all traffic. Those within the town were not allowed to leave in their cars and those who had gone outside the town to work had to park up on outlying roads, including the bypass, and walk the rest of the way. 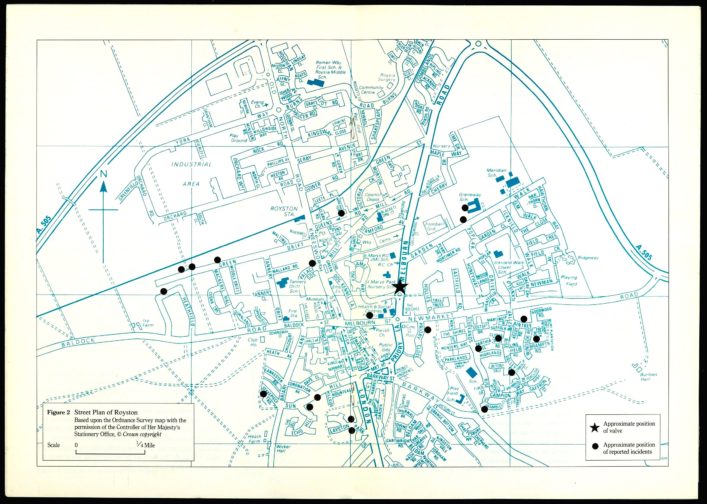 There were only two Police Officers on duty in Royston at the time and just one Police Car. Ralph Edwards, one of the police officers recalled “We could only drive round as quick as possible getting people out of their homes and ask others to help by in turn by telling their neighbours.” All gas appliances had to be switched off and if no response was received forcible entry to peoples houses was made.
I personally remember one of our neighbours banging on our door and telling all the street to turn off the gas and get out of their houses. All the neighbours stood talking together until we were told it was safe to return. I was most annoyed as this had all interrupted my pudding I was having. I was only 7 at the time!

North Herts District Council, the County Emergency Planning Team and the Women’s Royal Voluntary Service were called upon to operate a rest centre and to provide food for any people affected. Tannery Drift School was opened as a rest centre for people to stay overnight. Fortunately nobody had to stay the night as people were either able to return home in safety or made arrangements to stay with friends and relatives. The school assumed the role of an enquiry centre where the public could tell the police of further gas leaks.

The town was inundated with British Gas vehicles and engineers, the Meridian School became a control base for the repair operations and the Little Chef restaurant was used by the engineers for refreshments. Eastern Gas called on over 200 engineers who had to inspect every building which used gas. Every meter in town had to be changed. 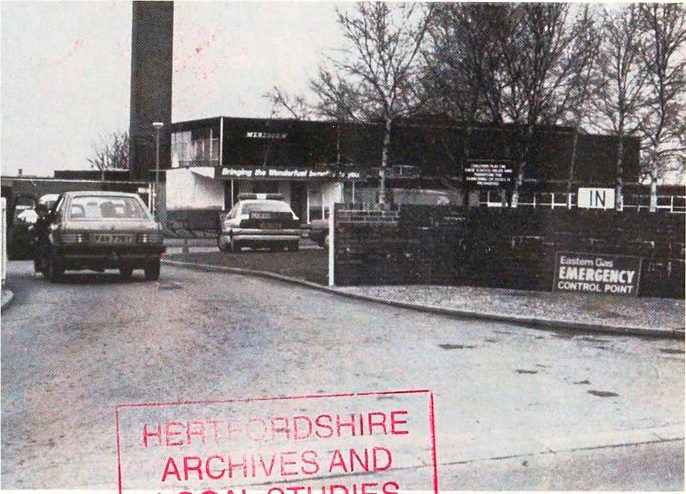 Two hospitals were put on standby but fortunately there were no fatalities. Rumour was that lots of deaths had been expected and the Heath was designated as a “body-receiving place” with hundreds of temporary coffins. Perhaps one saving grace was the mild weather; cold, snow and ice would have made the problem far more complicated, and more people could have suffered.

Calls were made for a public inquiry in to the incident but this was not granted. The Health and Safety Executive (HSE) undertook a full investigation and published their findings. The HSE’s investigation revealed that the root causes of the incident were: a) errors in describing and identifying the work to be done; b) further errors in the method of installation and commissioning, and deviation from normal declared practice, which led to the original errors not being detected; c) a lack of adequate communication between individuals to allow faults to be detected.

The accident could have had very serious consequences to life and limb, and following its investigation HSE prosecuted British Gas plc for breach of the Health and Safety at Work etc Act 1974. It became apparent as the case progressed that HSE would not succeed under the current interpretation of the law in establishing that any shortcomings in the procedures of British Gas, or in the way its employees had carried out their jobs amounted to a criminal offence on the company’s part, and the case was therefore withdrawn.