The Showmen and The Conservators 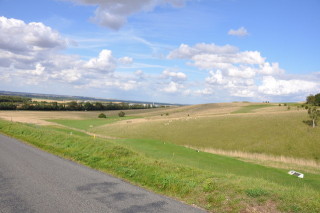 Good Friday 1894 saw what was probably the first challenge to the authority of the newly established Conservators of Therfield Heath and Greens. The afternoon before saw the arrival of the living vans and fairground rides belonging to the travelling showmen George and Cushi Manning, who as was the custom parked on the heath prior to doing some business on the Friday. However, since the previous year new regulations had been introduced which were intended raise money for the proper care and protection of the area. In other words this year the showmen were going to have to pay.

Notices were put in place and the bailiff of the Heath, John Pond, was given the task of obtaining payment. What he got instead was to put it mildly, a less than polite refusal. Mr Pond beat a hasty retreat followed by a string of profanities. The bailiff subsequently called the police.

The next morning before seven o’clock Inspector Hart of Royston arrived along with 20 constables. Just to make sure that there was no misunderstanding of what was required the relevant bye-law was read out and another request made for payment. Another explosion of colourful language followed especially from the ladies. George Manning lay down in front his living van and Cushi Manning gave PC Alton a hefty kick when an attempt was made to remove him. Meanwhile as PC William Allen was helping to remove one of the vans, Samuel Manning came behind him threw him to the ground and threatened to choke him. Other members of the family joined in a general attack on the police in an attempt to protect their property. Nevertheless, several vans were removed before a truce was called, the showmen promising to make the required payment by 10 o’clock.

This turned out to be a delaying tactic and battle again commenced. In the meantime the wheels of the vans had been let into the ground and the shafts removed to hinder movement. Other members of the family again lay down in front of the wheels with the women joining in the general affray – Eliza Manning using her feet to attack Inspector Hart. Events then took a more serious turn when George Manning went over to his son’s living van, grabbed an axe and threatened to cut the legs off the first man to touch it. Superintendent Reynolds tried to reason with him as did inspector Hart who was thrown to the ground. With the situation threatening to get completely out of control George was promptly disarmed and carted of to jail. At this point the remaining showmen came to their senses and paid up.

The following Wednesday the 28 March, George Manning was hauled before the local Justices of the peace to stand trial for assault alongside other members of his family. There were 11 summonses in all, six of which were for assault and others for obstruction.

Dr Cooper from Cambridge, representing the Conservators, appeared for the prosecution and the firm of Halliley and Stimson for the defence. The defence pointed out that showmen had been in the habit of using The Heath, and that although notices were in place many of not all of the fairground folk were illiterate and that their offence was not known to them until after they had parked. Also it alleged that it was not clear whether the original act applied to living vans as well as to fairground rides. Therefore, they argued, the conservators were going beyond their powers in trying to enforce the regulations. Surprisingly this flimsy argument prevailed and the case was dismissed. Along with this the assault charges were also dismissed as it was pointed out that the police were called to defend a wrong law.

Not surprisingly, on the 30 March, Henry Dalton Nash, Clerk to the Conservators, wrote to the Justices stating his intention to appeal to the Queen’s Bench Division of the High Court of Justice. This notice was served on them the following day. At the same time, he gave notice to them to prepare their case for the consideration of the appeal court. The appeal, as has been said, rested on whether the law regarding parking on the Heath was valid. At the appeal evidence was produced to show that in 1888 a provisional act was confirmed which allowed the conservators to keep order. It stated, in section fourteen, that no booths or other erections were to be set up without permission and, more importantly, that the conservators were entitled to make any bye­–laws necessary to protect the Heath.  On the 23 May the original verdict was overturned and an order made for George and Cushi Manning to pay costs of £21. 17s. 10p which costs were served on the showman’s solicitors. However, by 17 July it had become clear that no payment was likely to be forthcoming.

On the 1 August, The Conservators again went to court to obtain an order to recover cost and to obtain a conviction for non-payment. This having been obtained it then became necessary to obtain the Manning’s address. By now the year had moved on, the showmen had been followed and it was established that they were now overwintering at Amptill. From this point it became fairly easy to keep an eye on them. Still no payment of costs had been received by early the following year and on the 22 February 1895 another order for their recovery was sought. However, the Judge refused to issue the order on the grounds of possible want of means. The matter dragged on into early March and quite likely beyond. In the meantime, the question of whether the showmen had the means to pay had been settled. Fortunately, they had been closely watched while at Ampthill. It turned out that they were worth several hundred pounds in real and personal property. Finally, on the 6th May 1895, nearly fourteen months after the original offence, an order was issued at Hitchin County Court for their arrest.