WW1 Royston and the mystery postcard 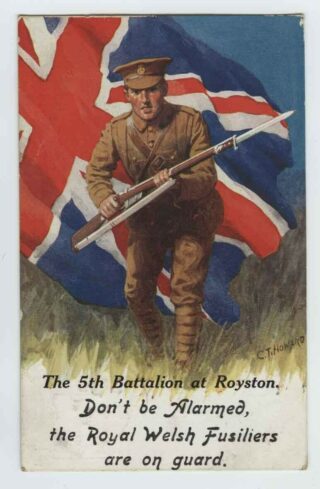 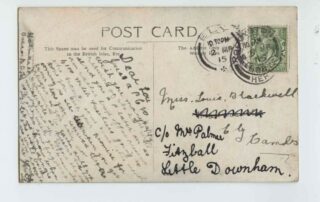 Every picture tells a story and the same is true of local postcards.

In the heyday of this not-quite-instant messaging medium (as King Edward replaced the old Queen at the turn of the nineteenth century) Royston like most towns had its own small producer of local postcards, the High Street chemist and photographer Robert H. Clark.

Most of the vintage cards of Royston on sale now are Clark’s images of the Heath and important local buildings such as the church, so I was surprised when this unusual First World War postcard turned up recently.

Clark lived on Baldock Road opposite the Heath and, from the message it carries on the back, it is apparent that this card was sent from his next door neighbour’s house by a servant in March 1915.

That neighbour was Charles Warren, one of two brothers who published the Herts and Cams Reporter & Royston Crow and ran the local print shop.

Now I am guessing that it was the Warrens who overprinted this generic card with the words ‘The 5th Battalion at Royston.’ I have never seen another one.

That got me thinking about why it had been produced, why the maidservant was so miserable that the 1,100 Welsh men billeted on the town were leaving and what they were doing there in the first place.

You can read the full extraordinary story behind this postcard at www.grahampalmer.co.uk