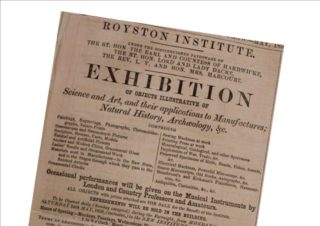 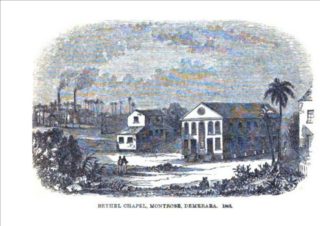 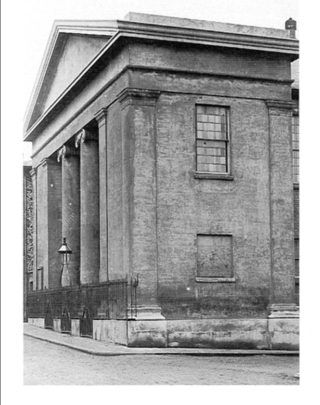 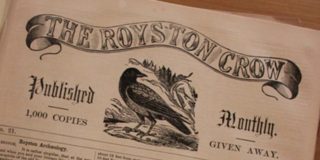 For Black History Month, Graham Palmer explores the early life or Royston’s first recorded black resident.
*
The aim of every printer is to make a good impression, a smudged one is of no use to anyone. Roger Britten – a black printer in Victorian Royston – was ever keen to make the best impression.
*
In March 1856 the Royston Institute opened its doors for the first time. Unrivalled in the whole of Hertfordshire, It housed a museum, library, lecture hall two reading rooms and classrooms. Only five years since the Great Exhibition had lured 6 million people to Hyde Park, the Institute staged its own exhibition. Nearly 7,000 people came over the fortnight to be wowed by the latest technological advances (such as electricity), archaeological discoveries and other novelties leant by the town’s dignitaries. Roger was as much one of the exhibits as the Columbian press he was operating.
*
“On the left there is a printing press…and by its side stands a noticeable young man… of pure African blood, although a native of Demerara. Visitors will find Roger Britten as willing and intelligent an expositor of the mysteries of printing, as they must infer from his cheerful and prepossessing countenance. He is printing on a small sheet…and he will stand aside to suffer any lady or gentleman who pleases to make this an epoch in their lives by printing the memorable words for themselves. Mark, too, how he turns from the printing press to the galvanic battery which stands near, with the management of which he seems quite conversant, ready to give a healthy shock to the nerves, and a tremulous motion to the hands, of any one who is bold enough to make the experiment.” (Hertford Mercury and Reformer – Saturday 17 May 1856)

Sixteen years earlier, Roger had been born in the British colony of Demerara (now Guyana). His father, Figaro, had probably been the property of Alexander Simpson and William Shand. The two men co-owned the plantation at Montrose and received compensation of £14,154 6sh 5d from the British Government when their 284 slaves were liberated in 1833. Roger’s was the first generation born into freedom.

On 30 May 1845, when Roger was just 5 years old, a new non-conformist minister arrived at Montrose to run the mission station at Bethel Chapel. Reverend William Garland Barrett had previously caused quite a storm in Jamaica. He was a curious mixture of social reformer, amateur scientist, religious zealot and pamphlet writer. He saw instilling a Christian education as part of his mission and his mission station at Montrose included a school for 120 children.
*
“How were our West India Colonies acquired? By sin! How were they peopled and cultivated? By robbery, man-stealing and murder! …And how are they governed now? By laws as unjust, impolitic and unnecessary, that have politically, commercially and religiously destroyed these Colonies.” (The Demerara Martyr, ‘Introduction’ by William Garland Barrett, 1848)
*
In his pamphlets Barrett celebrated the huge steps that had been taken since 1833. He went out of his way to contradict the view that, once freed, the slaves had become ‘idle, disorderly, worthless squatters’, pointing out that the majority had bought their own patches of land, built shacks, cultivated crops and had children who worked to pay for their own schooling. His one worry was that the new generation who had never known slavery had failed to build on their parents’ success.

One of Barrett’s sons later wrote to Charles Darwin about an incident that happened a year after the family arrived in Guyana. ‘My father on returning from an excursion to the interior came across a female alligator guarding her eggs. He shot the mother & the eggs he brought home placing them in a box in his study. Opening the box a few days after he found one or two had hatched meanwhile, these snapped & bit his fingers directly they came near. Taking up one of the remaining eggs he cut it round with a penknife & removed part of the leathery shell, instantly the blind young reptile within laid hold of his finger & attempted to bite. It was with some difficulty put back in its shell, & preserved in spirits.’ Barrett, it seems, liked to collect specimens.

He was not to remain in Demerara long for he fell seriously ill. When Barrett returned to England in April 1848 he took with him the 8 year-old Roger Britten as his adopted son.

That October the family found itself in Royston where Barrett had been invited to become the pastor of the John Street Congregational Chapel. Undoubtedly this move had been instigated by Joseph Beldam, himself a local non-conformist, pamphlet writer and leading lawyer to the Anti-slavery movement. Unlike most dissenting congregations, John Street was inhabited by ‘a curious mixture of the straight-laced and the relaxed’. On Sunday you were as likely to share a pew with a fox-hunting local magnate as a farm labourer. An imposing new building had been opened just five years previously on the site now occupied by the Cira Turkish restaurant.

In their home at 41 Back Street (Upper King Street) the new pastor’s family employed a live-in servant and a 12 year-old nursemaid to take care of Barrett’s youngest son, Edwin Relfe. Barrett had strict ideas on how a family ought to conduct its day-to-day life. While living in Royston he translated and published Woman: Her Mission and Her Life (which proposed that a woman’s task was to exert a healthy influence on her man and thus society as a whole) and wrote Hints and Examples for an Improved Family Worship on the Liturgical Model (which prescribed two acts of family worship – including scripture, hymn and prayer- every day, with the head of the family acting as pastor). Growing up in such an upper middle-class household must have been a confusing experience for Roger. Although Barrett was happy to see him apprenticed to a trade, the ex-missionary had much higher expectations for his own children who would receive the best education he could afford. While Barrett and his children might write pamphlets extolling the word of God, Britten was relegated to printing them.

Roger Britten and The Royston Crow

One year before the Royston Exhibition, Barrett had moved to Manchester. Fifteen year old Roger remained in Royston, apprenticed to the printer John Warren. Roger earned his living as a compositor, hand-picking moveable metal type and setting it in a composing stick, ready to be printed. It took much longer than typing words on a keyboard. After printing, the page had to be taken apart and each letter returned to its space in the wooden tray, ready to be reset.

It was 1855 and John Warren had big plans which included the launch of a monthly free newspaper, a venture that necessitated the purchase of the Columbian Printing Press which can still be seen at Royston & District Museum. Warren would not have been able to contemplate it without the back-up of a couple of willing and industrious trainee. He found such a worker in Roger, ever eager to make a good impression.

You can find part 2 of Roger Britten’s story here