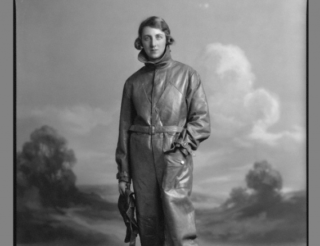 Violet Olivia Cressy-Marcks was elected to the Royal Geographical Society (RGS) in 1922, described by her proposer as of independent means, already having ‘travelled extensively’ from Alaska to Java and having made private ‘explorations in Tibet, Kashmiri etc.’

Her journeys took her round the world many times. Though twice married, (once divorced, and with three children) she principally travelled alone. Her extensive interests encompassed archaeology, zoology, ethnology and geography.

• 1925: Overland from Cairo to the Cape;
• 1927-8: Albania and the Balkans;
• 1928-9: spent the winter north of the Arctic circle travelling by sledge from Lapland to Baluchistan.
• 1929-30: through the Amazon and Andes to Peru by canoe and foot, surveying part of the north-west Amazon basin;
• 1931–2: fourth Round the World journey;
• 1933: Spain;
• 1934: India, Kabul, Tashkent, and Moscow;
• 1935: she took the first motor transport from Addis Ababa to Nairobi (during the Italian invasion) and visited the Ethiopian and Eritrean war fronts taking cine film;
• 1937-8: she travelled from Mandela to Peking (Beijing) over land; while in North West China she interviewed Mao Zedong for five hours at the remote cave dwellings at Yenning(Yan’an) that housed the wartime Communist Headquarters;
• 1943-5: she was a war reporter in Chungking (Chongqing), in southwestern China, for the Daily Express
• During the Second World War she was an ambulance driver for the British Red Cross abroad;
• 1945-6: accredited to the War Office as war correspondent for the Daily Express at the Nuremberg trials;
• 1953–4: Indo-China, Kathmandu, and Japan;
• 1955: seventh Round the World journey;
• 1956: eighth Round the World journey (during which her husband died at Nassau).

Eventually credited with travelling in every country of the world, she was keen to have a scientific grounding to her travels, and was a fellow of the Royal Asiatic and Zoological societies.

She was also a capable cinematographer and photographer, bringing films and photographs from many of her travels including politically sensitive areas. She studied in Arabia and undertook widespread archaeological studies including Egypt, Syria, Palestine, Persia, Java, China, Ethiopia, Afghanistan, and the Khmer, Inca, Aztec, and Mesopotamian peoples. Although she was regarded primarily as an archaeologist, part of her remit was to collect contemporary ethnological data on ethnic groups little known in the West.

In her will she requested that a copy of her biography be shown to the chief of MI5 ‘for his appreciation’, as well as entrusting that biography to (the then deceased) Bernard Rickatson-Hatt, who had spent three years in intelligence in Constantinople (as well as editor-in-chief for Reuters), suggesting sponsorship from the secret service for some of her many travels. These coincided with periods of international political sensitivity on a number of occasions. She often achieved largely unfettered travel, as in the case of Russia where she availed herself of permission to travel wherever she wanted and visited most of the Foreign Office officials (as she reported to Mao).