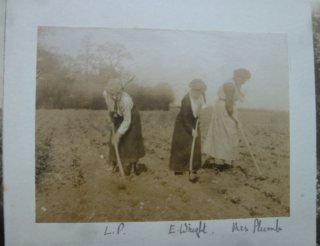 Louisa Puller As 'Land-Girl' during the First World War

In 1914 Louisa, a Cambridge maths graduate, was Secretary of the Eastern Counties’ branch of the National Union of Women’s Suffrage Societies. During the First World War she was hugely influential in getting women to work on the land, in place of the agricultural workers who had been called up.

She faced quite a challenge, as farmers were very reluctant to employ women, and even more reluctant to pay them. Louisa essentially led by example, being the first to get out on the fields and dig. She also gave talks and interviews with the press, persuading the public that women were up to the task.

Playwright Kate Miller told us about these “remarkable women I’ve come across while researching into the First World War in East Herts. Both these women are main characters in a play we will be touring in October, entitled ‘Seeing It Through”.