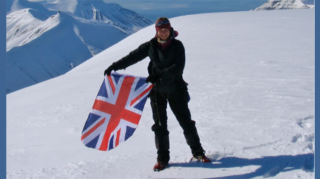 We’re thrilled that 24 year old Hertfordshire explorer Lucy Shepherd has written a blog post for us about her career so far:

As much as I hate the title, I suppose the easiest way to describe myself would be an adventurer.

It’s a rather show-offy title that I find cringe-worthy and somewhat overused in this age of social media but I’m afraid I use it for lack of a better word.
I don’t exactly fit the stereotypical adventurer persona. I’m 24 and blonde and often underestimated on my abilities in the extreme environments. This is despite having proven myself from the high altitude Bolivian mountains to the subzero temperatures of the Arctic, to the depths of the Amazon jungle.

To name a few adventures, I’ve skied from North to South on the freezing Finnsmarkvidda Plateau in Arctic winter, lived with a tribe in the Amazon, left my job to walk hundreds of miles solo through the mountains of Spain and competed in the world toughest race (although that one didn’t quite go to plan as a result of an injury.)
I can’t say when the adventures started because it’s always been ingrained in me as a young, risk-taking child.

Last year I was elected as a Fellow of the Royal Geographical society, a title I hold fondly.
Adventures take planning, fundraising and a lot of hard work. I don’t do it to stand out from the crowd. I do it to be out in the wilds to feel alive and free to see where my limitations will take me.

I can’t say when the adventures started because it’s always been ingrained in me as a young, risk-taking child.
Scotland became my chosen place to explore as a child and then at age 15, I was treated to a 2-week adventure camp at Ridgway Adventure School in Sutherland where I first learnt the real meaning of the word expedition. These expeditions felt all too exciting and from then on all I wanted to do was go on challenging expeditions. So from then on, I found a way to make that happen.
Expeditions can’t help but change a person and it’s always for the good. They give me a boost for life, recharge my batteries and make me appreciate every little thing. Expeditions give me confidence in mankind and myself. I live for the now and love making the crucial decisions and having responsibilities that could mean life or death.
On a larger note, expeditions make me want to make others more aware of the fragility of our planet and the crisis that we are facing with climate change and mass extinction. It’s all too clear when you’re surrounded by nature every day the damage that we are causing from our western habits. Nowadays, the general public is far too detached from the world in which we came from which is deeply saddening not only because of the impact it is causing on the planet but also those very people are the ones missing out on the best thing about this Earth.
I’m only just getting started with the places I want to explore, the boundaries I want to push and the awareness and inspiration I want to create.