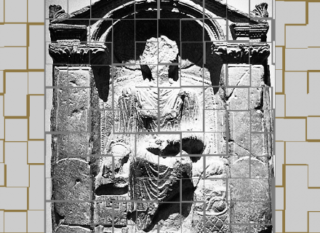 Regina lived in the 4th Century AD. She was of the British Catuvellauni, a tribe from the Hertfordshire area, and was sold into slavery. She became the property of Barates of Palmyra (now part of Syria), a merchant of Arbeia, the fort at the Eastern end of Hadrian’s Wall (now South Shields). Barates fell in love with her, gave Regina her freedom and married her. Sadly, she died at the age of 30 and, missing her greatly, Barates set up a famous tombstone in her honour. Regina is shown sitting in a high back wicker chair with her jewellery box, spindle and wool. Its inscription is in Latin, but there is also an added mourning line in Aramaic, the language that Barates would have spoken. “Regina, freedwoman of Barates, alas!”