The Letters of Arthur Martin-Leake November 1915 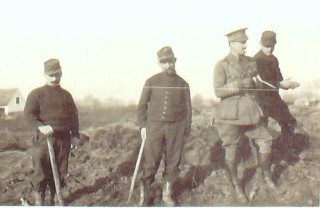 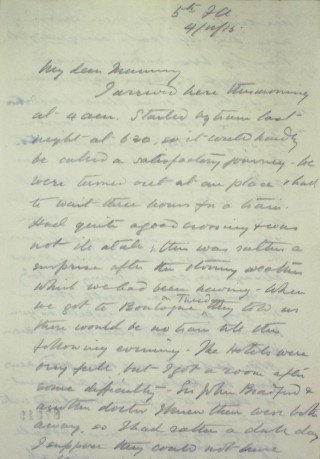 {Evidently Arthur’s hopes for leave, expressed in the last letter, were successful.}

I arrived here this morning at 4 am. Started by train last night at 6.30, so it could hardly be called a satisfactory journey. We were turned out at one place & had to wait three hours for a train.

Had quite a good crossing & was not ill at all; this was rather a surprise after the stormy weather which we had been having. When we got to Boulogne on Tuesday they told us there would be no train till the following evening. The Hotels were very full, but I got a room after some difficulty. Sir John Bradford & another doctor I knew there were both away, so I had rather a dull day. I suppose they could not have left us in London, because there are such a lot of men crossing now that the boats are quite full.

There has been nothing doing in these parts & I found the ambulance in exactly the same place & condition as when I left it & I am now in the same billet & quite comfortable. We have lost the big R.A.M.C. man of this div[isio]n. He has been sent off to the Balkans. Certainly a great loss to us as he was a very good man & has run this div[isio]n very well since the early days of the Aisne. He was always very keen on giving everybody as much leave as possible & treated me very well in this respect as you know. Have not seen the new man yet…

We are going on the same as usual, except that there is rather more sickness just now & we have a fair amount of work in the hospital. The weather has been very wet…yesterday & today & the country has quite resumed its normal winter state of muddiness. Bad feet have started owing to the mud & wet in the trenches.

Just now it looks as if we may be here for a long time, but of course nothing is certain & the move may come at any time. We are really lucky to have been left so long & if we remain for the winter it will be the greatest luck.

The country seems to be thoroughly sick of Mr Askwith {Asquith?}, but it does not appear to be possible to get rid of him.

Hoping you are all quite fit. Best love
Y[ou]r affect[iona]te son
A.M. Leake