Dink the donkey replaced by a mechanical pump 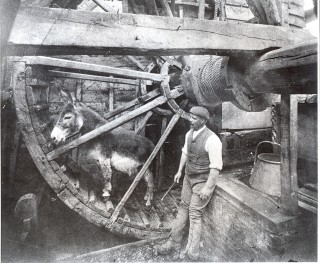 The donkey – wheel at Annables farm dates from the seventeenth century. The farm being on high ground, at the top of  Kinsbourne Green, the well is 145 feet deep, sunk into the chalk. The wheel is 13 feet 6 inches in diameter, and 3 feet 4 inches wide.  The bucket holds eighteen gallons of water: it took the donkey between ten and fifteen minutes to raise a full bucket.

At about the end of nineteenth century a mechanical pump was installed, and the donkey wheel was no longer used.  The donkey, whose name was Dink, was sold by the farmer, Charles Sibley, to Captain William Jeffcock, who lived at West Common.  During the First World War he was the local honorary army recruiting officer. Dink, away from the confines of the wheel, lived to be twenty – seven years old.  He was alive in 1916, when he was photographed with an army recruiting party at Captain Jeffcock’s. The donkey keeper is Thomas Welch.