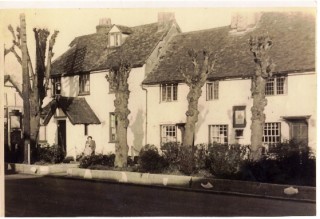 Like most parts of the country, Hertfordshire had a number of “Mumping” days, when people could go around to homes in the community asking for alms. The ancestors of modern customs like Christmas carolling and trick or treating, these were also known as Gooding or Doleing days.

One of the lesser-known examples was on the Feast of St Thomas on 21st December — perhaps more significant as also being the Winter Solstice. This custom was widespread and, being just a few days before Christmas, was actually the origin of the well-known rhyme:

The custom is attested in several Hertfordshire parishes and can be assumed to have been observed in other places where no-one happened to have recorded it. As so often, one of the best records relates to Harpenden, courtesy of the local 19th century writer Edwin Grey, who records:

In fact, this could be quite lucrative. One local Harpenden worthy customarily gave each Thomaser sixpence, a substantial donation in the mid-19th century. The custom is also recorded in Braughing and Tewin.

Thomasers often brought a token gift for the household. These could simply be sprigs of holly or mistletoe gathered from the woods, but they could also be nuts or fruit. They were believed to bring good luck to the household and were often incorporated into the Christmas decorations.

Besides poor people going a-Thomasing, the 21st December was notable for giving out more formal charity, often donations left in wills. Among those on record in Hertfordshire as being associated with St Thomas’s Day are:

St Thomas’s Day is largely forgotten now. In fact the Catholic Church changed the saint’s day to July in 1969, although the traditional date is still recognised by the Church of England. At one time, though, it was a highly significant day, both within the church calendar and, no doubt, from older pagan customs celebrating the solstice. Though it wasn’t confined to Hertfordshire, our county offers plenty of traditional illustrations of the customs associated with it.