A sad ruin today - but worth a visit 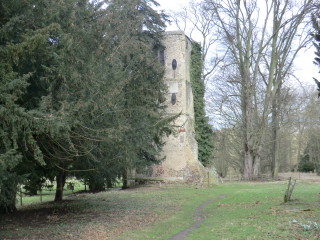 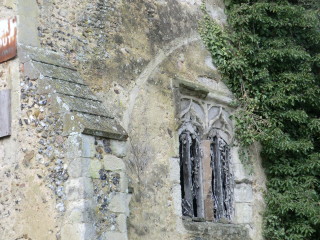 The Tower, showing where the chancel and nave were once attached.
Terry Askew 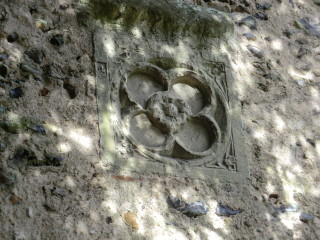 The Tower - showing a carved stone with a rose centered.
Terry Askew 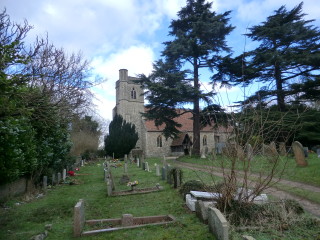 Evacuated from North London to Thundridge during the Second World War, I still have clear memories of those days walking with my mother from our lodgings in Ermine Street, along Church Lane and the river bank to what I regarded as an idyllic place, where we often enjoyed a thermos of tea and sandwiches. Although only four at the time, I distinctly remember feeling then that the solitary bricked up church tower was not quite how things should be, and carrying the memory until moving to Hertfordshire some thirty years later.

Until I learned better, it was easy to speculate as to what might have happened. Could it be that, perhaps, the ‘black death’ had wiped out an entire village, as had happened elsewhere throughout the Country? No, the answer turned out to be much simpler.

The church of All Hallows (All Souls) and Little St. Mary appears to have been of some antiquity boasting a Saxon chancel arch, and a 15th century tower which, at some time, was surmounted by a “Hertfordshire spike” – a tall narrow spire covered in lead sheeting. It is hard to imagine that at the time of its use, the church was the hub of the village.

Things changed, however, when the manor house of Thundridgebury was demolished and the local population began shifting to the area of the developing village of Thundridge in its present location. Another factor was the new squire of the manor setting up home at ‘Poles’ in the 19th century, inevitably attracting more of the local workforce in that direction. Robert Hanbury of ‘Poles’ received a gift of land at Thundridge and, in 1853, erected the present church of St. Mary at his own expense upon it, whilst agreeing to keep the old church for a burial chapel. However, despite the fact that it was the tower of the old church in disrepair, the nave and chancel were demolished upon disposal of the Thundridgebury estate, with the tower being retained.

Today, the walker is rewarded with an idyllic location still graced with yew trees and ancient gravestones. It is hard to understand, however, how despite its remoteness ignorant people still choose not to respect the location and feel they must carry out vandalism and desecration from time to time.