Memories of a tiny hamlet 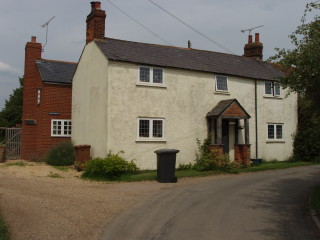 I have been reading some articles, published during the 60s and 70s by Wyn Hughes in old papers and magazines, about the hamlet of Hogsnorton, situated just outside Old Knebworth and Nup End and thought I should share the information.

He refers to the cottages as the last place in England to be known by this ancient name, derived from early times when the swine were allowed to wander in the woods and were said to be fed on beechmast and acorns.  The land for pigs was usually situated at the north end of a village – hence Hogsnorton meaning north.  It is thought that the north end of the village was chosen for the swine so that in the summer months the prevailing south winds would blow the smell of the pigs into the next village.

The oldest cottage in Hogsnorton – and there is only one other house in the hamlet – is Marshmallow, built about 350 years ago.  It stands in a hollow below Nup End Farm at Old Knebworth and Plummers at Rabley Heath.  Built in an attractive brick it now has a tiled roof but it was probably detached originally.  There are dormer windows in the roof, looking out over the field towards Codicote church which, until the recent development stood in a lonely position on the outskirts of the village.

It was here in this lonely churchyard one dark morning in 1824 that a shepherd going to work tripped over a corpse in the grass.  it was the body of John Gootheridge, of Nup End Farm who had been cruelly disturbed from his grave by body snatchers; but they must have been disturbed too and they left him behind to be buried a week later.

In the Domesday Survey

In the Domesday Survey the Manor of Codicote formed part of the possessions of the Abbey of St Albans and among the possessions listed was ‘pannage for 200 hogs’ – probably the area we now know as Hogsnorton.

Over the years several hamlets sprang up on the north east side of Codicote – Driver’s End, Nup End, Plummers, Rabley Heath, Potters Heath, Hogsnorton.  Some of them had only one or two inhabitants.

At Hogsnorton there was but one cottage.  Built during the 17th century it was a substantial little cottage with two good sized rooms on the ground floor with the same upstairs and a certain amount of land at the back.  Like so many old cottages, who lived there in early times is not recorded but by the early 1800s it was owned and occupied by James White and he had just over five acres of land with his cottage.

In those days there was a definite lane through from Hogsnorton to Slip Lane where George Arnold ran The Three Horse Shoes Inn with a smallholding of six acres.

Up the bridleway from Hogsnorton, Jopseph Watson was at Nup End and his workmen lived at the nearby cottages at the crossroads, opposite the Sheepshearers Inn, which was run by Samuel Tansley.

Some time after the 1840 survey was made, Hogsnorton increased in size.  A cottage of similar dimensions was built on to the end of the existing cottage and behind this new cottage was built a row of three one-up, one-down cottages.

In the early 1900s, these cottages went the way of so many small country properties – they were either occupied by farmworkers or stood empty.  When war broke out in 1939 they were requisitioned by the local authority to house evacuees.

For people coming from London there were many privations – no water, no electrcity or gas, and no sanitation.  The ground floor of the oldest cottage was let for 4/- a week to Mrs Simpson and her two little boys – she was joined shortly afterwards by her husband, Arthur, who was invalided out of the army.

The sudden lack of facilities meant nothing to Mrs Simpson.  She adored the lonely position of Hogsnorton and when peace came, she stayed on and rented the whole of the cottage. “When we first went to the cottage we could see daylight through the walls, but my husband made it beautiful.  I really loved Hogsnorton.  When we went there we only had a well in the middle of the yard for water, and oil lamps, but I didn’t mind”.

Mrs Simpson said goodbye to Hogsnorton in 1953 and moved to all the modern conveniences of a new house in Codicote and the cottage she loved at Hogsnorton stood empty – together with the other cottages there – for the next few years.  Then in 1958, Mr & Mrs Last bought one of them and the row of cottages behind, which they demolished.  The other cottage, where Mr & Mrs Simpson lived, was bought by Mr Barry Blackburn and it was he who gave it the name Marshmallow.

During Mrs Simpson’s time at Hogsnorton, Gillie Potter had a radio show in which he had an imaginary village of Hogsnorton.  It was consdierably larger than the real Hogsnorton in Hertfordshire – but this association of names brought Mr Potter down to meet the people in this remote little hamlet.  In fact, Gillie Potter not only entertained them with his radio show but he brought much fun and laughter to them personally.

When piped water was taken to Hogsnorton and an outside communal tap was erected, Gillie came down to turn on the supply, or, as he put it “take the waters at Hogsnorton”.

There was much pomp and ceremony for this exciting event.  The press were there in full force and the fire brigade attended and formed a guard of honour.

On another occasion, he came down to open the Midsummer Fete at Knebworth House and this time he made Mr & Mrs Simpson Lord and Lady Marshmallow, and their immediate neighbours, Mr & Mrs Norris were made Mayor and Mayoress of Hogsnorton.  It was a jolly occasion and the newly created ‘Lady Marshmallow’ celebrated it by bidding £31 for a tea service donated to the fete by the Queen Mother.

THE NEXT OWNERS AND THE BBC

Mr & Mrs Snoxall, the next owners of Marshmallow Cottage, were intrigued when they heard of Gillie Potter’s association with their home and “thought it would be fun to have a tape recording of one of his monolgues”, but when they approached the BBC they were told there were “technical difficulties” in acquiring such recordings.  However, they did have the pleasure of hearing a recording of Christmas at Hogsnorton when Gillie potter celebrated his eightieth birthday.  He died in 1975, and his passing brought little publicity, just the odd paragraph in one or two national newspapers, for it was many years since the humorous tales of goings-on at Hogsnorton had held listeners to their radio sets in the same way that the goings-on at Ambridge absorb listeners today.