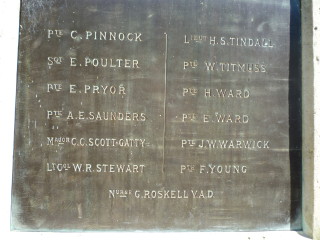 The Welwyn War Memorial records the names of 40 people who lost their lives in the first World War.  As the population of the parish of Welwyn stood at 1,708 at the time of the 1911 census, many would have been directly affected.   Unusually, the memorial lists the name of a woman, Nurse G. Roskell, V.A.D.   Who was she?

The Commonwealth War Graves Commission commemorates her as Nurse Gertrude Lucinda Roskell, 17th General Hospital, Voluntary Aid Detachment who died on 31 October 1915, Age 38.  She was the daughter of John Burrow Roskell and Gertrude Roskell, of Cronkley, Knebworth, Hertfordshire and was buried at Alexandria Military and War Memorial Cemetery.

This suggests that she was a local woman but in fact she was born in Penarth, South Wales in 1878 and went to Howell’s School near Llandaff.  By the time of the 1891 census her father had died and her mother was the head of household, described as a “Professor of Music”, and living at Windsor Terrace in Penarth.  Ten years later, the family had moved to Hora Villas in Hove.  By 1911 Gertrude was living independently as a boarder at 10 Duchess Street in Marylebone.

Gertrude died of appendicitis whilst nursing in Egypt and without a permanent home it is probable that the V.A.D. hospital in Knebworth was her last known address.  Certainly, there is no evidence of either of her parents ever living in Hertfordshire.

By the way, can anyone identify Cronkley?