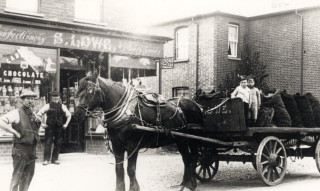 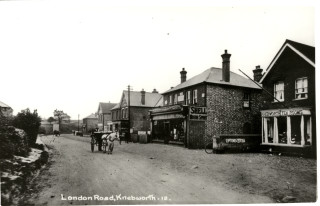 These memories, covering the period from the 1920’s to 1960’s, were recorded from local residents by Ann Judge.

Until shops began to be built in the centre of  ‘New’ Knebworth at the beginning of the 20th century, most people had their provisions delivered to the door. Or as Jim N describes, there used to be what I’d call a packman  used to go round selling these items, perhaps you don’t know anything about this, they used to travel around. Charlie Lowe, I remember when I first come here, I knew their grandfather, we got to know him well really , and most days they used to take all sorts of items, kitchens items, to sell round the villages. That was the way of life, you know.  A lot of people used to do that, years ago. To save people coming in from the villages to the shops you see.

Even up to the Second World War, the local village shops delivered their goods. Alf W remembers the baker used to come round with the bread, the man with the fruit and veg, he used to come from Stevenage with a horse and cart, and also the hardware man, Deamers, he’d come from Stevenage with a horse and cart, where we used to get the paraffin for the oil lamps.  And the candles, and the soap and all the pots and pans if you wanted anything.  Brushes, and all like that.  They used to come round once a week.

An important part of the community

And the shops were an important part of the community. It is fascinating that people remember so vividly the shops of 50 years ago.  Vic H recalls we seemed to have several grocers, I can’t remember the sequence of them, but there was Robarts, which is now the hairdressers, by the Bridge House there.  Then there was Mr Prince, which is now where the dentist is in Station Road.  There was Parkers Stores on the corner, which is now the undertakers.  And also in the main village, I think whereabouts Unwins is, was a Mr Austin.  And opposite him was Gammons, who had a sweet shop and also he did hairdressing behind the shop.  In Station Road there was Charlie Bates who was a hairdresser and always smoked a cigarette while he was cutting your hair so you got cigarette ash all over you.  Later on there was Ernie Edwards with a cycle shop, the other side which is now a hairdressers I think.  There was Hendersons, the haberdashers.  There was Mrs Dearman, she was also a haberdashers, and I used to get instructions from Mum, a little list to go and buy from there and always used to amuse me if the change was in farthings, she’d give you a packet of pins instead of a farthing for change.  Lowes was always there, but obviously on a much smaller scale than they are now.  ‘Cos there was a house next door to them. And I remember, he was a double-barrelled name, something Sayer, I can’t remember the rest of them.  The Post Office was my friend Bob Lissomade.  His father was the postmaster, Oh, there was the butcher Mr Thody.  There was another butcher Mr Gibson, and he was along there opposite the railway bridge near the station.  I think it’s made into flats now, but he lived there with his wife and they had a butchers, and they also had a slaughter house at the back and I can remember one of my friends, Ken Evans, who was friendly with the Gibsons, and we used to, when they were slaughtering,  we used to stand there and watch it.  Something I couldn’t do now, but I did it as a kid.  And then beyond them there was a wooden sort of shop, and that was Miss Woods, and we sometimes used to help her in the summer making ice cream. It was more like custard, frozen, but she called it ice cream anyway.  And we used to turn the tub until this was made.

Cynthia H’s memories are Oh well, then you see, we had little shops…. Well we had quite a lot of shops around , there was always Tingeys under the bridge there.  And Robarts, the people from Codicote, they had a big shop towards the station.  So yes, there was plenty of things.  There was the fish shop, meat shop, you see there was plenty there.  But we didn’t go picking pieces up.  We used to make a list out , what you wanted , and that was delivered, and then you sort of paid for it.  It was different altogether from what it is now.

You could get anything in Knebworth

By the 1950s, as Kath O says well, you could get anything in Knebworth.  I mean, there was even a shoe shop, there was clothes shops, there was a man’s outfitters shop, and you didn’t have to go out.  You couldn’t go out anyway.  I mean, we didn’t have cars and that, like they do now. Bob adds and of course there was the coalman in the coal yard at the station. I mean there was three coal merchants at Knebworth Station.  The coal used to come in by train, and they used to unload it, weight it up, and it was carted out to the village.

Cynthia H remembers Kimptons, that was run by  Mr Strickland, the baker there , and he used to get up at 3 o’clock , bake all the bread, and cakes. Mrs says yes, there was a newsagent, Smiths, by the station, which was useful because it had a small library.  You could take books out for tuppence a time.

Olive C recalls I mean there was Tingey’s, which was at the bottom of Westland Road, which is the paper shop in Station Road now.  That used to be the general provisions stores.  And I always remember you used to go into the shop, and first thing that would greet you in front of the counter were about three rows of tins of biscuits with the glass lids.  And you would lift them up and take the biscuits out.  And you would , you would shop just for the day.  You didn’t shop for a whole week.  Well you hadn’t got the money anyway.  I mean I can remember I used to wait for Tuesday to come so I would get 8/- Family Allowance.