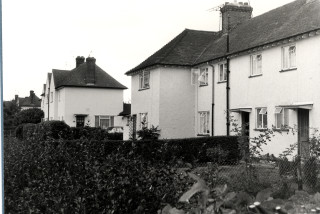 The following memories, covering the period of 1920’s to 1960’s, were recorded from local residents by Ann Judge.

Only a few houses had been built in ‘New’ Knebworth by the end of the nineteenth century – some in Station Road and a few in Gun Lane.  By 1910 more were built in Pondcroft Road, Milestone Road, Westland Road and London Road.  After the passing of the Housing and Town Planning Act of 1910, the ‘Garden City’ movement received huge impetus and Lord Lytton was keen to develop his property along these lines.  In 1912, a scheme for KnebworthGardenVillage was prepared by Edwin Lutyens, plans for which can be see in brochures prepared at the time.  Unfortunately, this scheme did not mature, partly owing to the outbreak of war in 1914.  However the area around Stockens Green was built, and Nen B’s and Vic H’s families moved there.  Nen moved there in the 1930’s  – well, the first house we lived one year, but it didn’t have a bathroom.  So we moved next door to Corner Cottage.  We lived there until 1938. It was a corner house, it was very spacious. We had two living rooms, and a kitchen, very large hall, and three bedrooms and a bathroom. It was a very dark kitchen, I don’t remember it very well, but we did have a wash boiler. The bathroom had a gas geezer, to heat the water, which was pretty efficient, at that time. It was a reasonable bathroom with a bath in the bathroom, that was unusual.  Not all the houses in Stockens Green had that.

Vic moved to Stockens Green after the war – well, that was lovely because there was no Meadway then, it was all fields at the back .We lived next to what was a gap then, then they built I think it was a nurses house to start with, but that was a gap where Frank Manning used to drive his tractor and his hay maker through there.  And there was always a haystack not far from us.  And I had an allotment at the bottom of the garden after a while.  Before that I had an allotment up in Old Knebworth which I used to do up there.Originally it had a stone copper in the kitchen and also a bath underneath a tabletop.  But then they altered it, and we had to give up a bedroom for a bathroom.  And the bedrooms were quite large, so you gave up quite a bit of space really.

After the Second World War, council houses were put up in Gun Road Gardens.  Bob Overmancame in 1938 with his parents, and Vi and Jim N had their first home as a married couple – It was an end of terrace house, three bedrooms and a very small bathroom, and if I remember correctly it was a fireplace, fire with a side oven where you could have a jolly good fire, coal fire, and then roast, and cook cakes in the oven.  Very basic sort of house, from what they are today, bricks, sort of uncovered in the kitchen, brick wall, which had to be just painted over.  And an outside toilet, just a cover on the outside, but a flush toilet.

‘ Pre-fabs’ had also been built after the war, in Cherry Close. These prefabricated houses had been introduced to help solve the shortage of housing.  Built in factories in either steel or wood, they were quickly erected, and usually had running water, inside bathrooms and electric cookers. Alf W recalls,  I waited 8 years from when I was married, until I got a pre-fab.  After fighting for the country, I waited 8 years for a place. Well, it was very good.  I mean, for what it was.  I mean they was put up quick, and they was very good accommodation at the time.

Olive C also moved into a pre-fab – Oh yes, it was wonderful, we were due, probably to move in the February, March, but that winter of ’47 was a hard winter , and we had snow and frost right up until May.  So therefore they couldn’t put the concrete base down.  So eventually when we did move in at the end of May it was sort of heaven. The front door was in the middle of the house, and there was a hallway, and as you went in to the hall on the left-hand side, there was one bedroom.  And then another bedroom at the back.  And then we had this bathroom which had a heated towel rail, which is something I mean you’d never ever heard of.  And then on the right hand side, was the living room and then in the far corner there was a door which went into the kitchen.  And we had a fire where the heat was supposed to go up into the ceiling and in each room there was a little tiny grill, which was supposed to send hot air in, but it wasn’t very successful at all.  Oh it was a palace, it was somewhere of our own.  In the kitchen we had a refrigerator, which I mean was absolutely unheard of, an electric cooker, and a clothes boiler.  To say nothing of the garden.

Alec K also remembers – oh yes, wonderful units.  They were aluminium framed. You got some luxury in those days, a refrigerator.  The central heating wasn’t all that good. It was a sort of hit and miss thing, you had a fireplace in there, and that was supposed to take the heat away and then bring it down without any fans or anything.

In Old Knebworth and Nup End, the experiences of residents was more basic.  Kath O had lived with her grandmother in the almshouses, next to the Lytton Arms and recalls:  There were very, what shall I say, they weren’t very modern when we moved in.  We had a bucket toilet in the shed, and there was a copper in the shed.  We did have running water, running cold water.  And then, while we were there they did modernise them and they built a bathroom on. The kitchen was tiny, with a great big sink, and a little tiny cooker. But it was very small.  I should think it was about,  7 feet, by about 4 feet. The cooker had got two rings on top, you know.  It was an electric cooker.  They did put the electric on,  ‘cos when we first went there, we had a range, and oil lamps.  And the toilet in the shed.  And then they put the electric on, I think they got a grant or something, you know for Almshouses.  And they put the electric on and built a toilet and we had a proper fireplace, and they took the range out.

A farmhouse at Nup End

Alf W lived with his grandparents too in Nup End – the farmhouse we lived in at Nup End had no gas, no electricity, no running water, we had to go across the green to the well and draw the wind the water up with a bucket from the well and take it back to the house.
The well was across the green, near where the pond is at the moment.  And we had to get up very early in the morning those days and light the fire, and boil the kettle to make tea.  And the toilet was not a flush toilet.  It was a bucket toilet at the bottom of the garden.  And that’s very crude it was aswell.  And in the days when you wanted a bath, you had to get the water from the well, bring it across and put it in a galvanised bath.  You’d only have a bath about once a week, because of the conveyance of the water.  I mean, there was paraffin lamps that we had.  You had to fill the lamps up to lighting, candles, you got up in the morning, in the winter months there was ice on the inside of the windows.  And, ‘cos those days the weather was very cold and you had snowdrifts.

Maud K has lived her entire life in Nup End and Old Knebworth – The toilet was outside as far as I can remember.  In a little hut sort of a thing.  I mean you’re back in the 1920’s.  I don’t think there was indoor toilets them days.  Not in the farmhouse even. Well we used to have a tin bath by the fire.  I can remember that.  And one of the rooms we had we had an inglenook fireplace in it. With a seat in it.  ‘Cos I can always remember, that’s about one of the first things that comes into my mind.

Overcrowding was always a problem during the 1930s and 40s, and many Knebworth residents had to share their accommodation.  Maud Kirk went back to live with her grandparents for six years after she was married, until she moved into the council houses in Park Lane, Old Knebworth.  Bob and Kath O also started their married life sharing a house – we started off living in Nup End, we had two rooms in a house in Nup End with a family.  And then we moved to Park Lane, about three doors down from his mother.  And we had, well it was just a bachelor gentleman lived in the house, and we more or less had the run of the house then. And we were about 5 years before we got this house.

Olive C also shared with her in-laws – and then as soon as Don was de-mobbed in 1946, I came back to live with Don’s parents in Westland Road.  We lived with them from June ’46 to May ’47, bearing in mind that Susan was born October ’46. So we were three of us in one very, very tiny bedroom, very tiny.  Well, as soon as we were married, we put our name down on the council list.  And then when the first lot of houses built after the war were pre-fabs.  And, to our delight we were allocated a pre-fab.

In addition to the council houses, private homes were being built, and some residents took advantage of buying a plot of land to build their own.  One of the earliest families to buy their own house was the Aunt and Uncle where Joy Abbiss lived in St Martins Road. That was 1936.  And it was built with local bricks, the same as the church, bricks made by Mr Darby.  The other houses at the same time were built with those bricks.  And Mr Dearman was the builder.  It cost £800, with a garage.

Roy and Cynthia H explain what happened in 1955 – so, we went to Mr Kitchener, as there wasn’t a local house agent in Knebworth then. We asked if he’d got any houses for sale.  Mr Kitchener is the local builder.  He said he was building two semi-detached up in Knebworth in Gypsy Lane.  He said you can buy the end plot for £350 and have one built there.  So that is what we decided to do.  The plot of land was £350, and the house was about £3000.

Vi and Jim N also bought a plot of land in 1973 – yes, originally, Knebworth House, they required £3000 for the plot, each.  And about three of us got together and we thought well we’ve been in Knebworth a long time.  That was a lot of money, and in the end we paid £2500.  Six plots. The cost to build the house, in all, about £8000 something.