Margaret Webb does some research 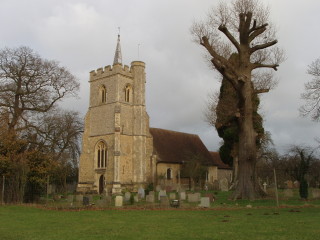 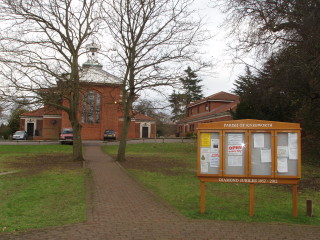 This article appeared in Kebworth Parish News in December 2012 and is published here courtesy of the Rev’d Jim Pye, St Martin’s Church, Knebworth.

All of these records can be viewed on the Church web site – click here and then on the ‘download’ page.

It was in 1538 that Thomas Cromwell issued an order that records of every christening, wedding and burial should be kept in a book locked in a “sure coffer” with two locks. These were often made on loose sheets of paper and sixty years later these entries were ordered to be copied on parchment in books. In 1598, in the reign of Queen Elizabeth, each parish had to keep a register on parchment and within a month after Easter a transcripts of the entries had to be sent to the diocesan registry. In 1837 only the baptisms, marriages and burials performed according to the rites of the Established Church were entered locally and the official register of all births marriages and deaths became the concern of the civil authorities. For this reason the following copies of the Knebworth register do not go beyond 1837.

The paper copy of this Register, typed by Frank A. Richardson, Dip. Hist. August 1971, has been in the safe at St Martin’s Church and has now been put onto the computer – over 3,100 records in all. I hope these lists may be of use to anyone wishing to make a search of the registers.

The register starts with the following: “A Booke or register conteyninge all Christeninges maryages and buryalls within the parish of Knebworth from the feast of St Mychaell Th’Archangell being the XXIX daye of September in the yeare of our Lorde God 1596 and in the yeare of the Raign of our Soveren Ladie Quene Elizabeth XXXVII as followeth et et.

The name christening was used before 1612 but after that date the ceremony was called baptism. In the first 4 years of the records the names of the sureties were also given an illustrated in this sample. “Thomas Youge the sonne of Thomas Younge the younger, christenede the seconded daye of July, 1598 whose sureties were Roberte Hodgekins, parson, Richard Bigge the elder and the goodwyffe Camfielde, the wife of Jhon Camfielde of the Trij Howsen . (‘Three Houses’)

In recording baptisms the father’s name was generally noted but not always the mother’s. When illegitimate children were baptised the father’s name was mentioned in very few instances. The father’s status was included in later years and with the main industry being agriculture by far the greater number of men were either labourers or farmers, with the occasional servant, gamekeeper or carpenter. In several instances men from Langley were described as tradesmen but without indication of which trade they followed.

Until about 1800 christian names varied very little, William, Thomas, John, George, James and Richard were the most popular with an occasional Edward, Philip, Francis, Joseph or Henry for the men, and Elizabeth, Mary, Sarah, Ann and Jane were the favourites for the female sex, followed in popularity by Hannah, Frances, Rose, Alice, or Judith. Quite often a son or daughter was named after a parent and such entries as William the son of William or Sarah the daughter of Sarah occurred frequently.

By an act of 1666 no corpse could be buried in any “shirt, shift, sheet or shroud of any material but sheep’s wool”. The act was not repealed until 1814 but there are only two instances in the Knebworth registers where this is recorded and duly attested by witnesses; these were in 1678-9.

In 1693 an entry in the burials reads “ye son Murdherd” no name is given and this could be a poor spelling or murdered. In 1741 two persons were murdered at Winter Green and were buried on October 14 th . (The name “Winter Green” has disappeared from my knowledge of Knebworth although being mentioned 3 times in the Register, but I did find reference to the name in connection with the original childrens’ railway in the play area of Knebworth Park before it was moved to The Fort. The railway was called Knebworth West Park and Wingergreen Light Railway, but where is Wintergreen now? The man named Pilgrim was hung in chains on Rabley Heath for this offence. The Codicote parish register records that Richard son of Joseph Pilgrim was baptised on 2 nd July 1707, married in 1729 and hanged on 22 of March 1741 for this murder of Mary and William Woodland of Knebworth. The variation in dates could be that he was hanged in the March following the October but included in the year from 25 th March in each year. One other crime is noted when Robert and Henry Freeman were executed for highway robbery in 1755 and buried on 18 th March.

Infant mortality was fairly high in some years, such as in 1750 to 1752; in these the 3 years there were 27 burials and 15 of these were of infants. Epidemics seem to have avoided Knebworth; even in 1665 the year of the Great Plague in London, there were only 5 burials here when, according to Daniel Defoe, 121 persons died at St Albans and 160 at Ware. The years of higher local death rates do not seem to coincide with epidemics elsewhere.

Two millers are noted, Edward Christmas buried in 1743 and Edward Dollins in 1758. There was a water mill on the River Mimram at Rye End, just north of Kimpton Mill about this time and these men probably managed this mill.

In some parishes it is possible to estimate the population by multiplying the births, marriages or deaths by certain multipliers; but this is not possible for Knebworth. Other parishes understandably were included in the lists. From Nup End in Codicote parish, Burleigh Farm in Letchworth and Langley in Hitchin parish, persons came to Knebworth church for ceremonies and registration. It is certain that many children baptised here did not remain in the village as they grew up. In the first 100 years of the period only three quarters of the number baptised were buried here and the proportion diminished until from 1800 to 1837 the baptisms were more than twice the number of the burials.

There was obviously not enough employment locally and many had to go to the towns or elsewhere to earn a living or to marry. The birth rate increased in the 18 th and 19 th centuries. The average number of baptisms per year in the 17 th century was 5.3, in the 18 th it was 8.0, and in the early 19 th century it was 10.5. Judging by the number of burials the population did not increase in that proportion.

The population was by no means a static one: many family names appear only a few times in the registers but other names such as Deards, Emmens, Skeggs, Sibley, Lumbis, Webster, Kimpton, Mardall, Camfield and a few others appear time and time again. There were thus some families who remained in the village for generations, while others came in for one or two generations only. The spelling of these surnames varies considerably in the typed version and one can only assume they were incorrectly entered by the priest of the time in the assorted books. Emmens is a case in point, being Emens, Emmins and Emmans. Lumbis becomes Lumbas, and Skeggs is occasionally Skegg.

There is little doubt that a much more detailed study of these lists and figures could show more information: but perhaps enough has been written here to note a few peculiarities in the recording of normal happenings and to indicate the general trend of events in the village before Somerset House became the official registry.

(Wintergreen Cottages remain part of the Knebworth Estate – situated on the edge of the Park on the B656 in the dip between Tower Lodge and the turning to Burleigh Farm.  The building seems to have originally been erected as a Workhouse c 1800 and divided into two dwellings at a later date.  Claire Fleck, Archivist, Knebworth House)