The war continued to have an impact at home, particularly on matters concerning food production.  Some aspects of this are revealed by Parish and Rural District Council minutes.

The beginning of the year saw Welwyn Parish Council dealing with local matters.[1]  Its February meeting noted that Mr Jones was seeking a piece of land near his house for and allotment.  The March meeting agreed that the Clerk’s salary be increased to £25 per annum.  Meanwhile, the 3 March 1917 edition of the Hertfordshire Mercury recorded great excitement at nearby Woolmer Green.  An aeroplane landed near the church.  The pilot had “lost his bearings and came down to inquire as to his whereabouts.  A crowd soon collected some of whom had never seen an aeroplane on the ground before“.

Welwyn Parish Council held its Annual meeting on 16 April 1917 when it was resolved that a letter should be sent to the Welwyn Rural District Council (RDC).  The Welwyn RDC minutes recorded the resolution at its 25 April meeting.[2]

“It was unanimously resolved that owing to complaints received by members of the Parish Council from Ratepayers in the Parish a letter be written to Welwyn Rural District Council calling its attention to the gross waste of public money in allowing its late Surveyor the sum of 15/- a week whilst on Military Service taking into consideration that Mr Moore is a Non. Com., has no dependants and his short record of service.”

The RDC resolved that no action be taken in the matter.[3]

July saw a successful Hospital Sunday with £120 raised.  With fine weather, the crowd enjoyed a parade through the streets with boy scouts from Welwyn, Woolmer Green and the Earl of Lytton’s group with their fife and bugle band, some fifty firemen from Welwyn and surrounding villages, the Loyal Lord Melbourne Lodge of Oddfellows, and the Court of Foresters amongst those taking part.  The Hertfordshire Mercury reported that the banners of the Hornsey and Wood Green branches of the National Union of Railwaymen were much admired and that special mention should be made of the Letchworth Garden City band which, after taking part in the procession, played during the afternoon in the rectory garden “to the evident pleasure of everyone“.

The procession was marshalled in Prospect Place by Private Bullard and a Canadian officer from Knebworth Hospital.  (The golf club at Knebworth was a VAD hospital).  Another participant from overseas was the Revd. Stacey Waddy, a chaplain in the Australian force, who preached “an admirable and most appropriate sermon” at the special service at the church.  (Digswell House, the home of Colonel and Mrs Acland was used as a convalescent home for Australian soldiers). 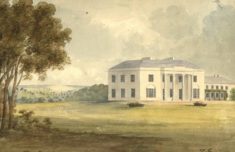 Control and Production of Food

In August the RDC considered a letter from the Local Government Board on the need to set up a local Food Control Committee.  They were instructed that this should include a  representative of labour and a woman.  The list of members published the following year shows that they exceeded the minimum quota and also further evidence that members of the National Union of Railwaymen were part of the local community:

The 5 June 1917 meeting of the Parish Council discussed  a letter from Mr Wilson of Woolmer Green allotments and correspondence on Potato Spraying and Food Production Societies.  It was resolved that a letter be written to Mr Wilson stating that it was the opinion of the Council that Mr Wilson ought to repair the gates and fencing as promised as soon as possible particularly in the present crisis.

On potato spraying it was agreed that a sprayer be purchased at a cost of £3 and that if Mr Downing, the Chemist, could not supply the Burgundy Mixture, 5 boxes should be procured from the government at a cost of £6.[4]  It was resolved to make a charge of 6d for the use of the sprayer by allotment holders.  It was resolved to postpone the question of a local Food Production Society for the present.

At its August meeting, the Clerk was directed to write to landowners asking them to replace the stiles on the footpath to Digswell across the fields in order to protect the allotments and crops as it had been reported that damage had been done by straying cattle and horses.

The main items at the 22 October 1917 meeting were on perennial topics.  It was agreed that a letter be sent to the RDC complaining of the state of the footpath and the manhole in the road opposite Messrs J Roberts shop in the Mimram and a letter sent to the County Surveyor about the holes in the roadway and the projecting manholes in Mill Lane. 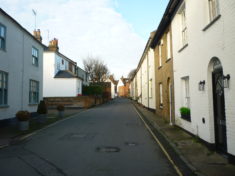 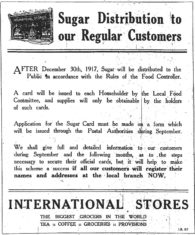 Advertisement from the “Hertfordshire Mercury”

By the end of the year, preparations were in force for rationing of food.  Everyone had to register with a local butcher and grocer.  The first item to be rationed was sugar in January 1918.

Further information on Welwyn during World War 1 can be found on the Welwyn and District History Society web-site, link here.

[1] HALS/CP106/1/2.
[2] HALS/RDC14.
[3] Mr Moore returned to his post and asked for a salary increase. In April 1919 it was increased to £100 as Inspector of Nuisances and £100 as Surveyor and further increased to £150 in December 1919.
[4] Burgundy mixture is essentially copper sulphate with some washing soda and water and use to prevent potato blight.  Eldred Percy Downing, MPS, was the local Chemist.