Victory for the children 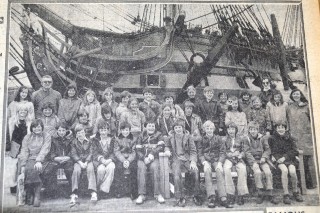 The following article appeared in the Welwyn Hatfield Times on 19 May 1978, page 15 along with the photo:

Famous Victory for the children

Children from the Oakland School, Welwyn visited HMS Victory at Portsmouth on Friday.

Their tour coincided with the 200th anniversary of the ship’s first commissioning, in 1778, and apart from being shown round Nelson’s famous flag ship, the 32 children were all presented with certificates to mark the occasion.

The school’s headmaster, Mr Ralph Davies, was presented with a first edition copy of a specially commissioned book on the history of the Royal Navy which will not be on sale until October, and some of the children, all aged 11, were met by the ship’s commanding officer, Lieutenant Commander Peter Whitlock.

Mr Davies said “We had no prior knowledge that we were going to get this special treatment. The children were absolutely delighted.