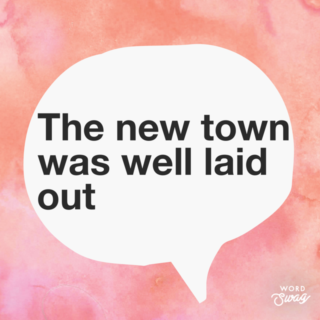 June 5th 1949 – Mary and John’s wedding day! Following a short honeymoon on the Isle of Man they returned to John’s parent’s house. Housing was scarce and expensive so soon after the end of the 2nd World War but it rapidly became clear to Mary that she could not endure married life in Deptford in a small, terraced, Victorian, three bedroom house with John, his parents, his married sister and her husband and their little boy, John’s nephew.

John in an ill-fated effort to please his bride rented rooms in Blackheath as he worked there but their landlady, the elderly Mrs Crow proved to be aptly named and Mary was no happier. Mary grew tired of waking as John left the house very early in order to load his milk cart before starting his round and then having to get up and work until five in the city. She would return to their rooms long after John had finished work only to find him waiting for her to prepare their evening meal.

Ever the optimist, John tried again and applied for a job with Express Dairies in Hemel Hempstead. He had been a milkman ever since he had been demobilised having served in the army in Italy. Express Dairies were happy to offer him employment and, joy of joys, the offer of a job meant that he and Mary were also offered a brand new three bedroomed house in Sawyers Way, Hemel Hempstead. Mary was delighted, a whole house, a brand new kitchen and bathroom and all to herself – well she would share it with John as long as he remembered to take his muddy shoes off before coming into the kitchen through the back door.

Following the move to Hemel Hempstead Mary decided to work at the dairy herself and she became a clerk in the office. Her travel time was minimal and her life was much easier but she still found it annoying that she would return home only to find the sociable John already installed in the kitchen with two or three of his friends drinking tea and smoking and laughing oblivious of the trails of dirty footprints covering most of the kitchen floor.

John and Mary were happy in Hemel Hempstead. The new town was well laid out and this made delivering milk much easier for John who was used to the steep rise of Shooter’s Hill and the side entrances and lower basement flats of the large Edwardian houses in Blackheath. Mary loved to shop in old Welwyn buying kitchen chairs from an elderly man who made them himself and going to the Roman Catholic Church along with many other young couples who were new to the area and friendly to her. Her favourite part of the church was the part where the statue of Saint Theresa stood. Mary used to light a candle and pray a secret little prayer which was eventually answered in January 1954 when I was born. I was named Theresa in honour of the saint and taken from St Paul’s Hospital, Hemel Hempstead to what from then on would be the family home in Sawyer’s Way.

I don’t know who lives there now but today the house is privately owned and it has been extended and modernised beyond Mary’s wildest dreams. Mary and John and little baby me had moved to Cambridge by 1955 as John needed to earn more as it was by then obvious that my baby sister would be arriving 16 months after I had appeared on the scene.

56 years later I moved back to Hertfordshire to Letchworth Garden City to be nearer my daughter and her husband who were expecting a baby – plus ça change!!!