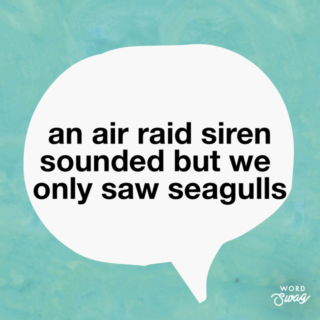 In the summer of 1939 my brother, Max, was 6 years old and I, Martyn, was 10. Earlier our Mother had become seriously ill and was expected to be in hospital for a time. Max and I were taken into care by Kent County Council and placed in the Medway Cottage Home in Chatham.

Us Medway children had been having a summer break in Dymchurch holiday camp that catered for large groups. Next to our dormitory huts were boys from Dr. Barnardo’s Homes who woke everyone with a bugler blowing Reveille. The holiday was cut short and us Medway kids were brought back to Chatham.

Within a week we were evacuated to Whitstable, on the north coast of Kent. Max and I were billeted together in the house of a childless couple. The day after we arrived (3rd September) as our group were walked around the town, we were told that war had been declared. When we approached the harbour, an air raid siren sounded but we only saw seagulls.

We evacuees had to spend a lot of time on long walks and that winter was very cold. The harbour froze over and small ice floes formed along the shoreline. The Blacksmith, who had a workshop on the beach, allowed us inside to thaw out and even allowed us to work the bellows for the furnace. The Salvation Army Bandmaster gave some of us music lessons and I was loaned a Flugelhorn to practice on.

In May 1940 the news was bad. French and British Armies were being pushed back to the French coast with many of the troops trapped at Dunkirk. Medway kids returned to Chatham.

We were quickly evacuated to South Wales. Max to Gilfach Goch and I to Tonyrefail. I was billeted with a lady who had her here orphaned granddaughters to care for and became ‘Granny’ to me. She also had an adult son and daughter in the house. Just before Christmas I got a letter to tell me that our Mother had died.

In 1941, having passed the exam, 3 of us Medway boys moved to Caerphilly to attend the exiled Rochester Technical School. In 1943 the whole school moved back to Kent, just in time for the first of the V1 (Doodle Bugs) Flying Bombs. There were also more usual air raids.

In 1944 two of us Medway boys joined the Royal Navy as Aircraft Artificer Apprentices. By June 1950 I had left the Navy early and was working on aircraft for Airspeed at Christchurch when de Havilland took over Airspeed.

In 1960 the work was transferred to Hatfield and I, with family, moved to Hatfield where we settled. In 1992 the company was part of British Aerospace and the whole site was to be closed. I retired in May. I have been so lucky.

Max also went to Rochester Tech school and became a Naval Aircraft Artificer. He had served his full time by 1963 and quickly emigrated to Australia with family and dog.